CAGAYAN DE ORO CITY, Misamis Oriental, Philippines — A police station in Butuan City drew flak after it put out an infographic on Saturday that pictured activists as terrorists, especially those who call the out government on issues hounding its response to the coronavirus pandemic.

The infographic, which was posted on the Facebook page of Butuan City Police Station 3, was taken down several hours after it was posted, sometime around 1 p.m., but not before it went viral, was screen shot and heavily criticized by a number of netizens, including a lawyers’ group in Mindanao.

The infographic depicted a roundtable meeting whereby those in attendance were supposedly planning on “issues that will be thrown at government to foment the people’s ire.”

People in the supposed meeting mentioned issues that government was asked to straighten up like the Social Amelioration Program, which has not reached those deserving beneficiaries, the distribution of food aid, the primacy of force in handling the quarantine, and mass testing for the coronavirus.

As if to relate these purely political actions to violence, there is a conversation about killing a village chief and innocent civilians, and blaming it on the Army.

The entire image was bannered: Ganito magpulong ang mga terorista! (This is how terrorists hold a meeting.)

Below is a warning, “Wag magpagamit at magpalinlang sa kanila! (Don’t be used and deceived by them.)

Shown in the infographics were the emblems of the Communist Party of the Philippines, New People’s Army, and the National Democratic Front of the Philippines. The roundtable image contained logos of progressive groups, such as Gabriela, Kabataan party list, Alliance of Concerned Teachers and Bagong Alyansang Makabayan, among others.

When contacted by the Inquirer, Police Capt. Emerson Apipit, chief of Butuan City’s Police Station 3, no longer explained why they came up with the infographic.

Instead, Apipit explained that the post was taken down in deference to an earlier reminder from Philippine National Police chief Gen. Archie Gamboa on the social media protocols of the national police. 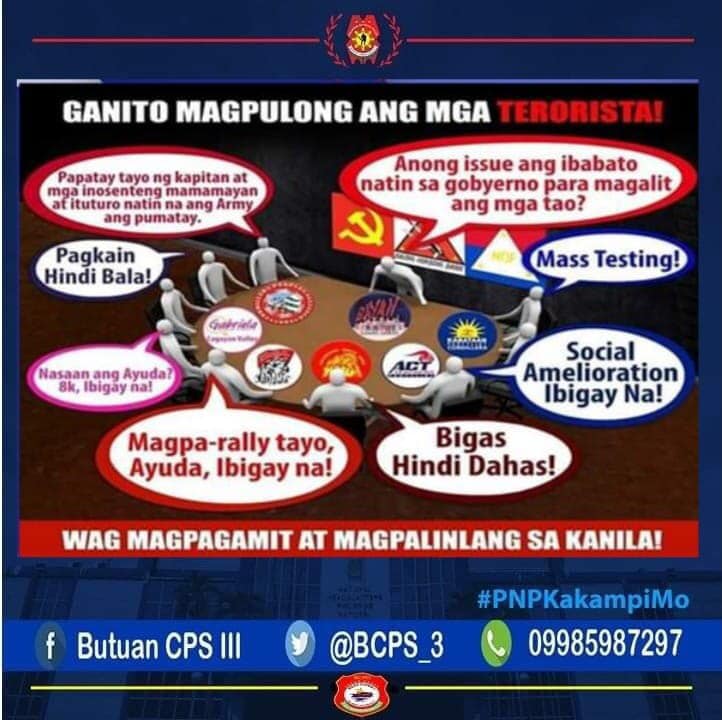 CONTROVERSIAL POST This infographic posted on the Facebook page of the Butuan Police Station 3 on Saturday morning claims that these persons or groups represented in a roundtable and raising questions over the government’s response to the coronavirus pandemic was how terrorists hold a meeting. The post was taken down sometime before 1:30 p.m. —SCREENGRAB FROM THE BUTUAN CPS III FACEBOOK PAGE

In light of complaints of Red-tagging previously lodged by militant groups in Mindanao against the Caraga police, Gamboa warned that police officers can face criminal and administrative charges if they violate the PNP’s social media protocol.

Reacting to the infographic, the Union of Peoples’ Lawyers in Mindanao (UPLM), in a statement, said they were “outraged by the careless statements made by the Butuan Police Station … ”

“What is terroristic about the calls for mass testing? For protection and benefits to our health workers? For social amelioration? For sufficient assistance to our OFWs (overseas Filipino workers) and LSIs (locally stranded individuals)?” asked lawyer Czarina Musni, a member of UPLM.
‘Legitimate, pressing concerns’

“Indeed these calls are legitimate and pressing concerns of the Filipino people, and not just the progressive groups, in the face of the COVID-19 pandemic,” Musni said.

Musni explained that “with the glaring impunity afforded to state actors violating quarantine protocols while ordinary citizens are being arrested for simply doing what they can to make ends meet, one can expect the growing outrage of every Filipino citizen to rise against abuse, to rise against tyranny.”

“And this is precisely what the antiterrorism bill wants to do — to suppress the people from expressing their concerns, from demanding what is just and what is right, and from calling for accountability from the government.”