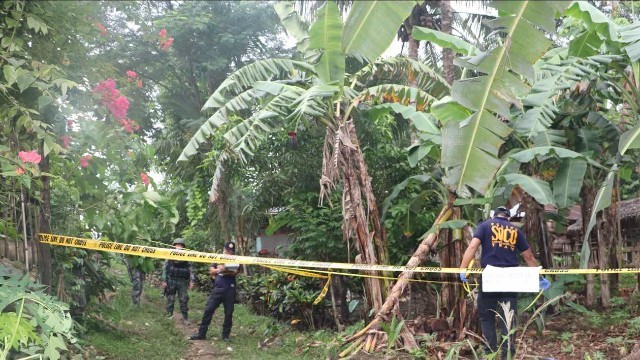 CLASH. Police inspect the site of a clash between armed rebels and the Philippine military. Photo from Armed Forces of the Philippines

At least 5 members of the New People's Army were killed in an encounter with the joint military and police forces in Mabinay, Negros Oriental on Thursday, June 18, at around 12:45 am.

One of the rebels killed, Isaias Rabilista, was wanted in connection with a July 2019 ambush that killed 4 police officers in Ayungon town.

The National Democratic Front of the Philippines' in Negros confirmed through Twitter direct message the 5 killed were members of the New People's Army.

According to a a press statement from the Armed Forces of the Philippines, the 11th Infantry Battalion, with the Regional Mobile Force Battalion and the Mabinay police said they were called by residents to houses in Sitio Taligting, Barangay Luyang, that were reportedly being occupied by armed rebels including Rabilista.

The joint forces went to the area to serve the arrest warrant issued by Judge Rosario Cariaga of Bais, Negros Oriental, when they were allegedly fired upon by the rebels.

According to the AFP's account, the two camps exchanged fire for nearly 30 minutes, before the government troops overpowered the NPA.

A number of M-16 rifles, one AK47, one .45 caliber pistol with a defaced serial number, 3 AK47 magazines, 4 rifle grenades, one Improvised Explosive Device (IED), assorted magazines and ammunition, and documents were retrieved from the site of the clash.

"I would to like to commend the residents of Barangay Luyang for reporting the presence of armed men in their area," Redosendo said.

"Taking up arms against the government and the Filipino people will never address and resolve conflict and issues,” he added.

The encounter comes after a spate of killings on the island, where 10 were shot dead in the span of 6 days from June 12 to 17.