How the coronavirus complicates the US–Philippine alliance

From the East Asia Forum (Apr 23, 2020): How the coronavirus complicates the US–Philippine alliance (By Charmaine Misalucha-Willoughby, De La Salle University)

In February, Philippine Senator Ronald ‘Bato’ dela Rosa’s tourist visa to the United States was revoked. Dela Rosa, a key ally of President Rodrigo Duterte, was also the architect of the administration’s war on drugs when he was the chief of the Philippine National Police. This move prompted Duterte to terminate the Visiting Forces Agreement (VFA) with the United States. The revocation of Dela Rosa’s tourist visa was the proverbial straw that broke the camel’s back. 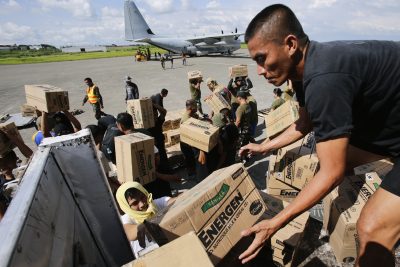 Founded on the 1951 Mutual Defense Treaty, the US–Philippine alliance now seems to lie in shreds. But this is not the first time that the alliance has had its raison d’etre challenged. In 1992, the Philippine Senate voted to close two US military bases — the Clark Air Base and the Subic Bay Naval Base. But China’s seizure of Mischief Reef in 1995, coupled with the brewing insurgency in Mindanao, underscored the need for the Philippines to develop its security capabilities.

Under the veil of uncertainty in the post-Cold War era, the VFA was ratified in 1999 and allowed US military personnel temporary access to the country. The agreement reinvigorated the alliance through cooperative measures in the areas of counterterrorism, intelligence, surveillance, reconnaissance, and humanitarian and disaster relief. The most significant changes brought about by US–Philippine cooperation were instilling civil engagement and bolstering professional norms within the Armed Forces of the Philippines.

By 2012, China’s assertive moves in the South China Sea challenged US commitments towards its treaty ally. The Scarborough Shoal incident formed the strategic backdrop for the Enhanced Defense Cooperation Arrangement in 2014. Duterte’s assumption of the presidency in 2016 was a game changer not least because of his anti-US stance and his pursuit of an ‘independent foreign policy’, which resonated strongly amidst perceptions of an overdependence on the United States.

It is no wonder that a tourist visa issue could push the alliance over the edge. While there is reason to believe that regaining balance is inevitable despite the current crisis, the story is not that simple. There are three factors that could complicate the movement back to equilibrium.

The first factor is the coronavirus pandemic and its impact on US-China relations. Initially reported in Wuhan, China, the outbreak quickly spread as millions of residents were able to leave the city before the lockdown took effect. Over 2,400,000 cases and 169,000 deaths have been reported globally and other countries have implemented lockdowns as well.

The economic costs of the pandemic are massive. The lockdowns mean travel restrictions for hundreds of millions of people. The hardest hit sectors are tourism, hospitality, entertainment and energy with a combined estimated loss of US$143 billion in China alone. Manufacturing has also been hit. This supply-chain disruption means export demand has fallen significantly, which could cause China’s annual growth rate to slow considerably. Shipping and port operations are similarly impacted.

Economic costs aside, the Chinese government has shifted the internal narrative from a ‘people’s war’ against the disease to the argument that while the virus was first discovered in China, it need not have necessarily originated there. Still, China’s ability to bring daily new cases to single digits in mid-March implies that it can be an essential player in the road to global recovery.

How China recovers from this pandemic will redefine its identity as an emerging power and its relationship with the United States.

The second factor that complicates US–Philippine alliance politics is the role of the United States in an evolving global environment. As it confronts the fact that it is now no longer the only great power and becomes more focused on domestic issues, the United States may consider letting go of some of its alliances. This is especially a risk with President Donald Trump at the helm and the 2020 elections coming up.

Another layer of complexity is how the United States can manage risks amid the uncertainty caused by the pandemic. The supply-side shocks in China are now complemented by demand-side factors at the global level. There are now over 720,000 cases in the United States with deaths at around 37,000. The US stock market has performed at its worst since the global financial crisis.

The third factor that complicates the US–Philippines alliance stems from domestic politics in the Philippines. When Duterte came to power in 2016, his strongman tactics influenced his foreign policy because he needed to manage relations with both China and the United States in the context of disputes in the South China Sea.

This need for a balance took on the overtones of a pivot to China. In short, the Philippine strategy has so far shifted from balancing to hedging to bandwagoning. The problem is that these shifts were politically motivated without any strategic underpinnings. Will similar thinking be observed as the 2022 election cycle draws near?

With the Philippines now at over 6700 cases, it is uncertain where the country will stand when the coronavirus dust settles. What will the post-coronavirus Philippine–China relationship look like? How will the Philippines respond if China again resorts to ‘squeeze’ tactics in the South China Sea as it did in the Scarborough Shoal incident? How will Duterte respond to expectations amid stalled Chinese investment in projects as a result of the pandemic?

We therefore find ourselves in an interregnum. These three factors are critical because they can help us gauge the impact of the pandemic on power relations. While there is no doubt that balance in the US–Philippine alliance will inevitably be regained, the road towards it is fraught with complex challenges.