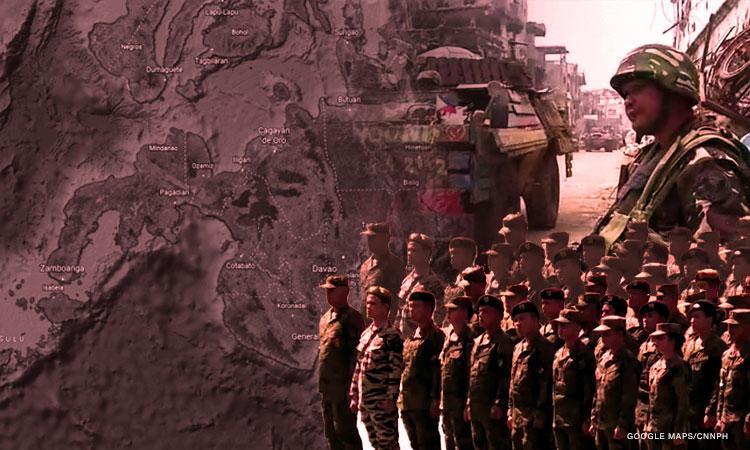 Esperon cited this as among reasons to again extend martial rule in the South for another year or until December 31, 2020.

"Pangalawa, gusto nating maawat ito na nga, itong (Second, we want to stop these) armed groups and we do not want them to have so much freedom moving around. Pangatlo, gusto ko ring iaddress itong(Third, we want to address this) CPP-NPA which mostly affects the eastern half of Mindanao," Esperon added.

The Communist Party of the Philippines (CPP) and its armed wing New People's Army (NPA), is also considered by the government as a terrorist group, but the court has yet to formalize this tag. It is the biggest communist group in the country that has waged a five-decade insurgency. Duterte has terminated peace talks with communist rebels as both sides accused each other of ceasefire violations.

The Constitution states that the President s commander-in-chief of the Armed Forces may place the entire country or any part of it under martial law "in case of invasion or rebellion, when the public safety requires it." The declaration lasts only for 60 days, but Congress has since granted all three requests for an extension as Duterte argued the need for military rule to quell the rebellion in Mindanao.

Duterte first declared martial law in Mindanao in May 2017 as government forces fought with terrorists in Marawi City, capital of Lanao del Sur. More than a thousand were killed, mostly terrorists, during the five-month war that ended October 2017. A fourth martial law extension is possible as Malacañang said Duterte will follow the recommendation of security and defense officials.

Some human rights groups claim the military committed human rights violations during the implementation of martial law. Malacañang and the Armed Forces vowed to investigate these alleged abuses, calling on the victims to file complaints.

https://cnnphilippines.com/news/2019/7/31/mindanao-martial-law-bangsamoro-transition-esperon.html
Posted by Retired Analyst at 3:06 AM