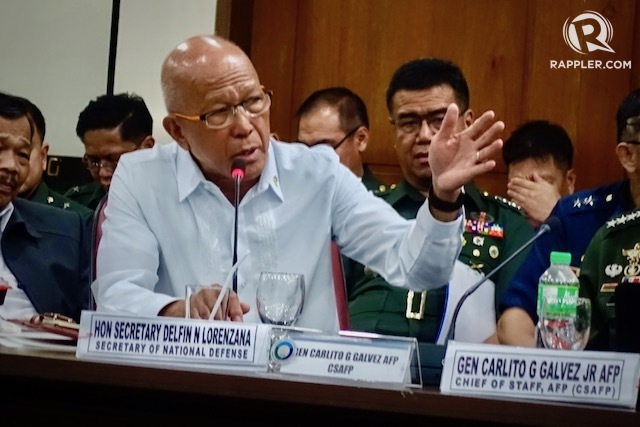 DEFENSE SECRETARY. Defense Secretary Delfin Lorenzana at the House of Representatives for his agency's budget hearing on August 29, 2018. Photo by Rambo Talabong/Rappler


Defense Secretary Delfin Lorenzana has backtracked on the urgency of acquiring Russian submarines amid concerns raised against the plan.

“It is still in the planning stage,” Lorenzana told lawmakers during a budget hearing on Wednesday, August 29.

He told lawmakers the country might not be able to afford the maintenance of submarines.

“The congressman is correct that a submarine is very expensive. In the first place, the capital outlay is already very expensive. To maintain it is also very expensive. To man it, you need two sets of crews that will alternate in manning the submarine,” Lorenzana said.
He was speaking to Magdalo Representative Gary Alejano, one of the lawmakers who raised concern over the cost of the project.

Lorenzana’s answers during the budget hearing departed from his pronouncements prior to his Moscow trip last week. On August 9, he said the submarines talks “will likely” push through with Russia, which is willing to offer them on a loan.
He previously said the country may have its first submarine by 2023. (READ: PH pivot to Russia advances with port visit, submarine talks)

Lorenzana said the military will instead prioritize the acquisition of more brand new surface fleet and “will decide that later on” if the country needs to acquire submarines.
“We’re looking at it on the idea that it is a good deterrent capability. If we have at least two, at nagtatago diyan, magdadalawang isip sila kung pupunta dito (hiding there, other countries will think twice about entering our territory),” said Lorenzana.

He said South Korea, France, Japan, and India are among the other countries peddling their submarines to the Philippines.

“We will still decide. Hindi pa ako decided diyan (I haven’t decided on that). We are still in the process of procuring more surface vessels,” Lorenzana said.

The Philippines is facing security challenges in the West Philippine Sea (South China Sea), where it has overlapping claims with several countries.

China has violated Philippine sovereign rights, according to a 2016 international tribunal ruling, by its occupation of Mischief Reef and harassment of Philippine vessels sailing to Ayungin (Second Thomas) Shoal. Both maritime features are inside the country’s Exclusive Economic Zone, according to the ruling.

Lorenzana said he hopes to finalize work to acquire offshore patrol vessels from an Australian company that has a shipyard in Cebu.

He said he’s also looking forward to the delivery of the Navy’s brand new frigates beginning 2020.
“By the end of the second horizon, we will have a sizeable number of surface fleet that are brand new,” said Lorenzana, referring to the stages of military modernization plans.

The country’s traditional ally, the US, earlier raised concern against the country’s plan to acquire submarines from Russia.

"If they were to proceed with purchasing major Russian equipment, I don't think that's a helpful thing to do [in our] alliance and I think ultimately we can be a better partner than the Russians can be," US Defense Assistant Secretary Randall Schriver had said. (READ: US official warns PH vs buying Russian equipment)

Three US Cabinet members – Secretary of State Mike Pompeo, Defense Secretary James Mattis, and Secretary of Commerce Wilbur Ross – also wrote to President Rodrigo Duterte to urge him to buy defense assets from the US.

Duterte said he was not impressed by the letter but is willing to discuss it further with the US officials.
https://www.rappler.com/nation/210797-delfin-lorenzana-backtracks-russian-submarines
Posted by Retired Analyst at 11:14 AM