The humanitarian assistance dispatched was just the most recent instance of wider collaboration between the two sides despite remaining differences. 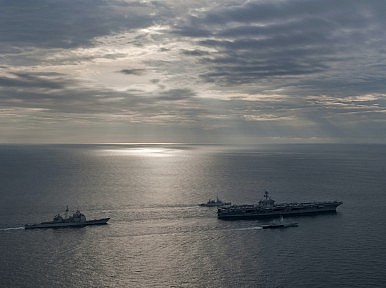 Over the weekend, a Malaysian naval vessel arrived in the Philippines as part of the humanitarian assistance being dispatched following the outbreak of Typhoon Tembin last week, which had left hundreds dead and tens of thousands displaced. The interaction put the spotlight on longstanding security cooperation between the two Southeast Asian states, which has included a humanitarian component in times of need.

As I have noted before, Malaysia and the Philippines, both members of the Association of Southeast Asian States (ASEAN), have long tried to forge greater cooperation to deal with a range of traditional and non-traditional threats – including terrorism, piracy, and illegal fishing – in spite of the differences that remain between them (See: “Confronting Threats in the Sulu-Sulawesi Seas: Opportunities and Challenges”).

One form of that collaboration has been humanitarian assistance. For instance, most recently, Malaysia was one of the countries that provided humanitarian aid to the Philippine government as it continued to battle Islamic State-linked militants following their siege in the southern city of Marawi (See: “ASEAN’s Post-Marawi Islamic State Challenge”). That aid included the provision of food, personnel, and military aircraft to help the ASEAN Coordinating Center for Humanitarian Assistance on Disaster Management (the AHA Center) fly out some of its ASEAN relief items stored in the hub in Subang.

Following the outbreak of the Typhoon Tembin, which had devastated the southern Philippines, Malaysia had signaled early on that it would be contributing some humanitarian assistance to the Philippines. Malaysian Defense Minister Hishammuddin Hussein had publicly said that he had called Philippine Defense Secretary Delfin Lorenzana to express his sympathy and concern and that the Malaysian Armed Forces (MAF) were on standby to provide humanitarian assistance. Subsequently, Malaysian defense officials had indicated that the MAF would be deploying humanitarian aid to areas in the Philippines affected by the storm, in addition to some of the other forms of ongoing assistance between the two sides, including in related search and rescue operations.

On Saturday, the KD Kedah, a patrol vessel, was arrived at Naval Station Romulo Espaldo in Zamboanga City, where it had been scheduled to deliver about 45 tons of aid, mostly consisting of food supplies and clothing. The assistance was handed over to Philippine officials on board the vessel by Naval Region 2 Commander Rear Admiral Abdul Rahman Ayob, who led the humanitarian aid mission.

According to the Royal Malaysian Navy (RMN), he also paid a courtesy call on Rear Admiral Rene V Medina, Commander of Naval Forces Western Mindanao (NFWM), and Rear Admiral Rene V Medina AFP and Lt Gen Carlito G. Galves Jr, Commander Western Mindanao Command (WESMINCOM). Though few specifics were disclosed from the meeting, discussions included not just the state of relief efforts but other topics as well such as security issues related to the waters in the southern Philippines, which continues to be a priority for both countries and a platform for wider subregional and regional cooperation.