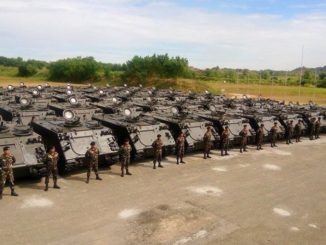 The Department of Budget and Management (DBM) has released the Special Allotment Release Order (SARO) for the said project on November 29, 2017 amounting to PHP1,051,650,000

According to MaxDefense Philippines this M113A2 upgrading project will be through a negotiated procurement which is still under Revised Armed Forces of the Philippines (AFP) Modernization First Horizon second list.

In this project, 44 APCs will be armed with 12.7mm machine guns in Remote Controlled Weapons Stations (RCWS) and 5 APCs will be converted into mortar carriers armed with Soltam 81mm Cardom mortar.

M113A2 APCs to be upgraded are part of 114 M113A2 APCs transferred by United States government through its Excess Defense Article (EDA) Program in 2015.