Trillanes says he only presented 'facts' in meeting with U.S. senator

From Rappler (Oct 20): Trillanes says he only presented 'facts' in meeting with U.S. senator 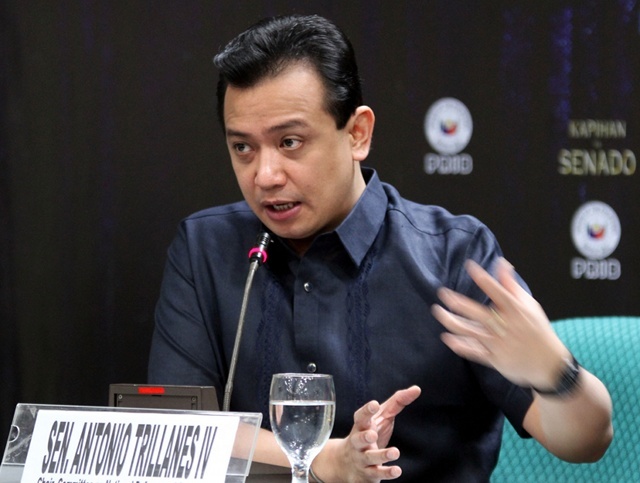 US TRIP. Senator Antonio Trillanes IV confirms meeting with US senior officials, including Senator Marco Rubio, in the US.

Opposition Senator Antonio Trillanes IV said on Friday, October 20, that he only presented facts about the situation in the Philippines during his meeting with US Republican Senator Marco Rubio in the United States.

In a statement, Trillanes also denied reports that he tried to convince US lawmakers to persuade US President Donald Trump to cancel his planned visit to Manila in November for the Association of Southeast Asian Nations Summit (ASEAN) and Related Meetings.

“I would like to confirm the information that I met with senior US government officials to include Senator Marco Rubio. As mentioned in the tweet of Senator Rubio, we talked about enhancing RP-US relations, corruption, and the human rights situation in the country,” Trillanes said.

“To be clear, I did not try to stop the state visit of President Trump since these things are carefully planned and cannot be stopped on the mere say-so of a Philippine senator,” he said.

Malacañang earlier expressed hope that Trillanes did not give “biased” information to US officials that would "adversely affect” the ties between the two countries.

The opposition senator denied this and said he just presented factual information. After all, he said, no one can "fool" the US government on the status in the Philippines.

“Unlike the officials of the Duterte Administration, I presented only factual information. Besides, you cannot fool the US government; they know what's happening in our country,” Trillanes said.

Senate President Aquilino Pimentel III earlier said that he hopes Trillanes is not “wishing or, worse working for bad relations between the Philippines and other countries” and that anyone who loves the country should always promote its best interests.

In an apparent reply to such concerns, the minority senator assured the public that he did push for the country’s interests – which he said is not the same as what President Rodrigo Duterte wants.

Rubio and US Senator Benjamin Cardin of Maryland earlier introduced a bill seeking to restrict the supply of defense equipment to the Philippine National Police, which used to head the bloody campaign until Duterte ordered the Philippine Drug Enforcement Authority to take over following public backlash.