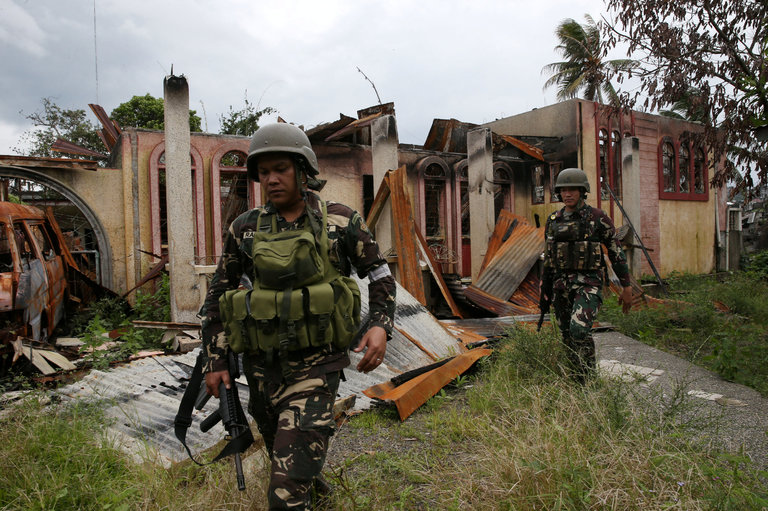 Soldiers walking past damaged houses in Marawi, a southern city in the Philippines, on Thursday. Credit Romeo Ranoco/Reuters

A high-level Islamic State operative who funneled money and foreign fighters to the Philippines, helping militants seize territory there, was “taken” during a gunfight on Thursday, President Rodrigo Duterte announced.

The operative, Mahmud Ahmad, 39, a Malaysian former university lecturer, helped finance the siege of the southern city of Marawi, which jihadists stormed in May, killing scores of peoples and sending thousands of residents fleeing. After a fierce battle to retake the city, Mr. Duterte on Tuesday declared Marawi liberated.

Mr. Duterte said on Thursday that Mr. Ahmad had been “taken,” but did not specify whether that meant he had been captured or killed.

Hours earlier, the head of the armed forces, Gen. Eduardo Año, said Mr. Ahmad was among 13 militants who died in gun battles that raged late Wednesday and into Thursday morning. Six soldiers were wounded in the fighting, General Año said. A mother and her teenage daughter who had been taken hostage were rescued, he said.

“One of the rescued hostages revealed that Mahmud was dead and was buried last night,” the general said.
Officials were not immediately available to reconcile the different accounts.

In public remarks on Thursday, Mr. Duterte portrayed the Islamic State as an existential threat, and defended his decision in May to declare martial law on Mindanao, the southern island that includes Marawi.

“We have to finish this or we go kaput,” Mr. Duterte said.


He said the police and the military had warned about “retaliation” from the Islamic State in the face of their defeat in Marawi.

He said of Mr. Ahmad, “He was taken this afternoon and that completes the story.”

According to analysts, Mr. Ahmad had acted as a link to the ISIS central command in Syria, helping funnel money and foreign fighters to local militants trying to seize territory in the Philippines.

Mr. Mahmud was also a close associate of Isnilon Hapilon, one of Asia’s most-wanted terrorists and the leader of Abu Sayyaf, a terrorist group linked to the Islamic State. Mr. Hapilon was killed in a gunfight with government forces on Monday along with another militant leader, Omarkhayam Maute.

After their deaths, Mr. Ahmad assumed leadership of about 30 militants still fighting government forces in Marawi.

Mr. Ahmad trained at camps run by Al Qaeda in Afghanistan in the 1990s while studying at Islamabad Islamic University in Pakistan. He was a former lecturer of Islamic studies at the University of Malaya in Kuala Lumpur, one of the country’s top schools.

Analysts say Mr. Ahmad had helped organize and finance the travel of recruits from Indonesia before the Marawi siege in May to join in the fighting. The Philippine authorities have said that about 30 foreigners took part in the monthslong battle.

According to Philippine military intelligence, Mr. Ahmad also facilitated the travel of at least four Malaysians to join the Islamic State in the Middle East, including in Syria. He arrived on Mindanao, in the Philippines’ restive south, in 2014, where he sought out Mr. Hapilon and helped plan the Marawi siege and organize local terrorist cells.

A video released by the military showed him in a meeting with Mr. Hapilon and Mr. Maute as they meticulously planned the siege, which began on May 23. Mr. Ahmad reportedly funneled 30 million Philippine pesos, or about $580,000, to militants for the attack, according to intelligence officials.

Rommel Banlaoi, a terrorism expert who leads the Philippine Institute for Peace, Violence and Terrorism Research, said the funds went to help Mr. Hapilon’s group stockpile firearms, weapons and other logistical items for the siege.

“Mahmud, also called Abu Hanadzalah, was being sought by the Malaysian authorities for ties to global terrorists,” Mr. Banlaoi said. “He has been identified as a militant recruiter for the I.S.,” he added, using the initials of the Islamic State.

He said that among the people Mr. Ahmad had helped to go to the Middle East was Ahmad Tarmimi Maliki, who drove a car packed with bombs into an Iraqi police headquarters, killing 25 people in 2014.

While Mr. Ahmad and Mr. Hapilon may have died, there are other militant leaders waiting to emerge, Mr. Banlaoi said.

“I.S. may have lost a very valuable conduit in Mindanao with the reported death of Mahmud,” he said. “His death can severely affect financing terrorism in the region. However, threats of attacks from other terror groups remain imminent. It’s not yet over.”

More than 200,000 residents are crammed into refugee camps, waiting for the military to declare an official end to the operation.

The battle in Marawi has been financially draining and has tested the abilities of one of the region’s most poorly equipped armies. After Mr. Hapilon’s death, Mr. Duterte flew there and declared the area “liberated from terrorist influence.”