What Did the New US-Philippines Terror Drills Achieve?

From The Diplomat (Sep 29): What Did the New US-Philippines Terror Drills Achieve?

The inaugural iteration of Tempest Wind bears attention within the broader context of the alliance. 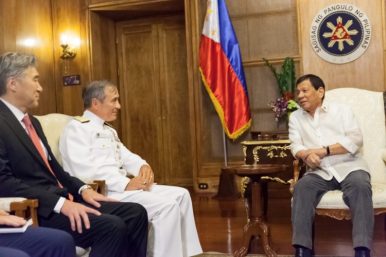 Image Credit: US Embassy Manila
Over the past week, the United States and the Philippines have held the first iteration of a new, recently unveiled counterterrorism drill. Though both treaty allies have long developed a range of bilateral exercises, the holding of this one bears attention given the ongoing efforts to boost counterterrorism cooperation amid concerns around the Islamic State as well as the broader context for ties under the leadership of Rodrigo Duterte.

As I have noted before, despite all the focus on Duterte’s fierce anti-American rhetoric, U.S.-Philippine defense ties have seen more of a downgrading than a severing (See: “Will Duterte End the US-Philippine Military Alliance?”). In addition to some refocusing and renaming in terms of exercises, there have also been some new forms of cooperation advanced as well in response to ongoing challenges, be it in on maritime security amid transnational crimes in the Sulu-Sulawesi Seas or on counterterrorism following the Marawi crisis that erupted in May (See: “US Terror Aid to Philippines Signals Enduring Defense Ties Under Duterte”).

On September 15, the U.S. Embassy in Manila had publicly announced for the first time that the two governments would embark on a new bilateral, whole of government counterterrorism drill called Tempest Wind in mid-September, despite the fact that the two sides had agreed on this last year.

As I noted in an earlier piece, Tempest Wind, which had been approved as a new exercise by the Mutual Defense Board and Security Engagement Board (MDB-SEB) back in November 2016, was to include not just drills, but additional military assessments, national level engagement, and subject matter expert exchanges taking place in both the Philippines and Hawaii, which is where the U.S. Pacific Command (PACOM) is located (See: “US, Philippines Launch New Drill”).

From September 18 to 26, the two countries conducted the first iteration of Tempest Wind in Clark Field, Pampanga. More than 1,200 U.S. and Philippine civilian and military officials participated in the exercises, which focused on improving the ability of both countries to plan, coordinate, and conduct counterterrorism and security operations.

The exercise included a scenario that used a real commercial liner filled with more than 150 actors portraying hostages. In the exercise scenario, terrorists linked to the Islamic State (ISIS) hijacked a passenger plane from Sydney, Australia bound for Hawaii and forced it to land in the Philippines. After negotiations failed, forces on the ground were forced to conduct a tactical response, resulting in the killing of the eight hijackers and the rescue of 162 Filipino and American passengers.

Following the exercise, Philippine Defense Secretary Delfin Lorenzana and U.S. Ambassador to the Philippines Sung Kim discussed the details of what had occurred and its significance. Lorenzana emphasized the challenging and realistic nature of the exercise for both sides, and Kim described Tempest Wind as a unique initiative that “went far beyond our normal array of joint exercises.”

In terms of the broader context of U.S.-Philippine defense ties, the conclusion of Tempest Wind came as defense officials from the two countries meet for the MDB-SEB annual meeting in Hawaii to discuss joint exercises for 2018, led by Admiral Harry Harris of PACOM and General Eduardo Ano of the Armed Forces of the Philippines (AFP). As details continue to emerge, they will offer some concrete indicators of what we might expect in U.S.-Philippine defense ties for the following year.

https://thediplomat.com/2017/09/what-did-the-new-us-philippines-terror-drills-achieve/
Posted by Retired Analyst at 6:38 AM