The United States says it is verifying the recording, but also that it has 'no reason to doubt' its authenticity 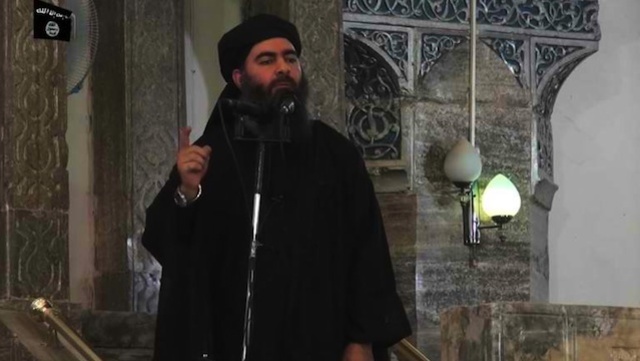 In his first alleged message in nearly a year and following reports of his possible death, the elusive jihadist leader called on his supporters to target the "media centers" of countries fighting his group.

The United States said it was verifying the recording, but also that it had "no reason to doubt" its authenticity.

"The leaders of the Islamic State and its soldiers have realised that the path to... victory is to be patient and resist the infidels whatever their alliances," Baghdadi allegedly said in the recording.

It was not clear when the message, released by the ISIS-affiliated Al-Furqan media group, was recorded.

In it, he lashed out at "infidel nations headed by America, Russia and Iran" who, along with their allies, have inflicted losses on the jihadists during separate offensives against ISIS in Syria and Iraq.

"We will remain, we will resist and be patient... We will not give in," he said, a day after Iraqi forces defeated ISIS fighters who had seized areas in a surprise offensive around Ramadi west of Baghdad.

The apparent ISIS leader called on "soldiers of the caliphate" to pursue their "jihad", or holy war, and attacks.

He urged his followers to "target the media centers of the infidels", without providing further details.

The voice said to belong to Baghdadi listed his group's defeats, referring to "blood spilt in Mosul, Ramadi, Sirte, Raqa and Hama".

In Syria, the group is facing ongoing offensives in its former de facto Syrian capital of Raqa and in the central province of Hama.

A US intelligence community source said they were examining the audio message.

"We are aware of the audio tape purported to be of Abu Bakr al-Baghdadi and are taking steps to examine it," the source said in a statement.

"While we have no reason to doubt its authenticity, we do not have verification at this point."

Russian foreign ministry spokeswoman Maria Zakharova told Agence France-Presse: "I have no information about this recording."

Thursday's was the first audio message said to be of Baghdadi since November 2016, when he spoke in a defiant tone in urging his supporters to defend the city of Mosul against a massive operation by Iraqi forces.

That recording, also released by Al-Furqan, was a rare sign of life from Baghdadi.

In July, Moscow said it was struggling to confirm if Baghdadi was dead or alive, a month after reporting his possible demise in a May air strike near the ISIS one-time stronghold of Raqa in Syria.

With a $25 million US bounty on his head, Iraq-born Baghdadi has successfully avoided an intense effort to seek him out for 6 years or more.

Rumors have abounded about Baghdadi's health and movements, but his whereabouts have largely remained unclear.

On September 1, a senior US general said Baghdadi was probably still alive and likely hiding in the Euphrates River valley stretching from Syria to Iraq.

A US-backed Kurdish-Arab alliance and Russian-backed government forces are waging rival offensives against ISIS territory on either side of the Euphrates River in Syria's Deir Ezzor province.

In Iraq, US-backed Iraqi forces are pressing their battle to retake the northern city of Hawija and a section of the Euphrates near the border with Syria.

Shortly after the jihadists swept across swathes of Iraq in June 2014, Baghdadi appeared before thousands of faithful at Mosul's Great mosque of Al-Nuri to urge Muslims around the world to join his "caliphate" straddling Syria and Iraq.

The jihadists have since lost vast territory in both countries.

But US counterterrorism chief Nick Rasmussen warned on Wednesday, September 27, the global threat posed by ISIS had not been diminished by its battlefield defeats in Iraq and Syria.

He said, using an alternative acronym for ISIS, there was "not, in fact, a direct link between ISIS' battlefield position in Iraq and Syria and the group's capacity to inspire external attacks."

Baghdadi's group has claimed its members were behind deadly attacks carried out worldwide, including in Paris, London and Barcelona.

Wednesday's operation near the Iraqi city of Ramadi was likely to have been an attempt to divert the security forces from an offensive they launched last week against the jihadists' last two footholds in Iraq.

https://www.rappler.com/world/regions/middle-east/183741-isis-chief-calls-jihadists-resist
Posted by Retired Analyst at 4:55 AM