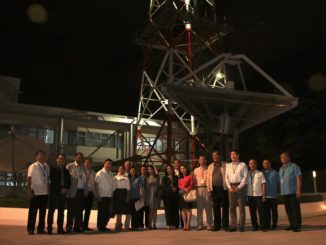 Philippines’ air traffic radars are now up at 13 from 3, the Department of Transportation (DOTr) said. With 13 radars the Philippines can now monitor 85% of its entire airspace to provide safer and more efficient flights.

“On September 2017, an additional satellite-based CNS/ATM will be turned over to DOTr-CAAP to enable 100% coverage of the PH airspace,” DOTr added.

CNS/ATM system is a state-of-the-art computer and satellite based air traffic management technology is the same technology that is being used by Australia, Taiwan, and other European states.

“The CNS/ATM project was started in 2009, but due to delay in construction and other challenges, it did not hit its target completion in 2016. Upon Secretary Art Tugade’s assumption into office, he ordered the CAAP to fast-track the project,” DOTr said.

“The CNS/ATM system is now in parallel operations with the existing technology and will be fully operational by December 2017,” it added.

Posted by Retired Analyst at 4:51 PM