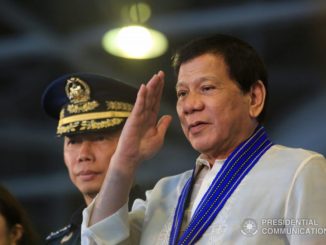 President Rodrigo Duterte on Friday, July 14 during the 11th Ambassadors’ Tour Philippine reception in Davao City recognized the contribution of United State to the Armed Forces of the Philippines in its fight against terrorists in Marawi City.

“Let us give where credit is due. The United States helped the Armed Forces in this fight,” the President said.


The President also mentioned about China’s help to Philippines’ counter-terrorism effort and Russia’s pledge to support.

He said no strings are attached in China and Russia’s help. “Walang head of state, si Putin o si President Xi Jinping magsabi: ‘O, bigyan kita but you should be loyal,” he said.

He also said he cannot enter into military alliances with other nations that will violate the current US-Philippines defense agreement.

“Dito lang tayo sa Amerikano,” Duterte said. “Do not make the mistake of putting something on my behavior. I like talking to people. You have to make friends, and there is a need for you to acquire the kind of firearms at nandiyan sila.”

Posted by Retired Analyst at 4:45 PM