(UPDATED) The Abu Sayyaf Group is reportedly asking for P30 million in ransom, based on a video 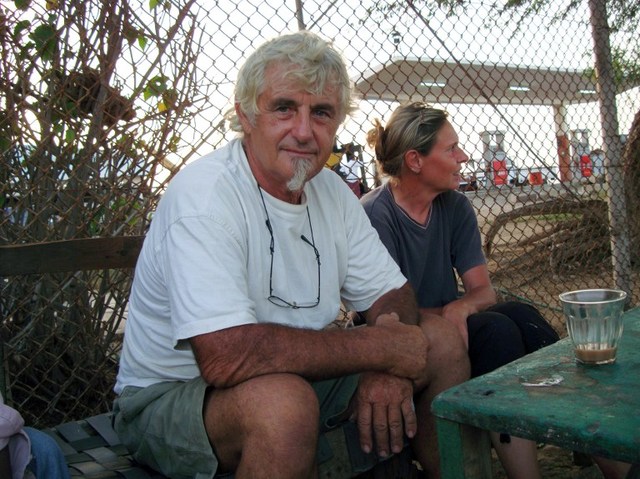 ABDUCTED. German nationals Juerguen Kantner and his wife Sabine Merz (R) pose for a photograph on May 5, 2009 in Berbera. File photo by Mustafa Abdi/AFP
A German hostage of the Abu Sayyaf Group appeared in a new video to say that the local terrorist group threatened to kill him if ransom is not paid soon, according to a non-government counterterrorism organization.

SITE Intelligence Group said the kidnap gang has given an ultimatum on the hostage, threatening to kill him in less than 2 weeks.
Various news sites said the same, citing the release of a video, supposedly on chat app Telegram, showing 70-year-old Juerguen Kantner pleading for his life.

The Philippine military deferred comment on the video. It still has to be validated, according to Armed Forces of the Philippines public affairs office chief Colonel Edgard Arevalo.

Arevalo said the military discourages payment of ransom and said they will do their best to rescue him. (READ: PH military keeps eye on ISIS-linked terror groups amid NPA clashes)

"We will exert all efforts to rescue him, especially now that we have a continuing operation against the Abu Sayyaf Group. Our operations have been yielding good outcomes. We are still positive that we will be able to rescue him," he said.

"We discourage payment of ransom because we believe it continues to embolden them. It continues to capacitate them. They can even buy the loyalty of the community," he added.

"I will never stop appealing to the captors to spare the lives of those innocent victims for the sake of their families and loved ones," Dureza said. (READ: Lorenzana: Abu Sayyaf still holding 25 hostages)

The video follows one that was released only last month to show that Kantner is alive.

The body of a woman with a bullet wound, later identified by the hostage as his partner, Sabine Merz, was found on board the vessel.

The group also kidnapped a German couple in 2014. They were released after supposedly paying P250 million in ransom.

Upon Duterte's orders, the military has shifted its focus back to its counter-terrorism campaign.

The Abu Sayyaf is a notorious kidnap-for-ransom gang based in the southern Philippines that has pledged allegiance to the international terrorist group Islamic State (ISIS).

It is made of up several small armed bands based in the mainly Muslim southern islands of Basilan and Jolo, where they are also holding a Dutch and foreign crew members of several other vessels.

It is blamed for the Philippines' deadliest bombing attacks as well as dozens of kidnappings-for-ransom.

http://www.rappler.com/nation/161452-german-hostage-abu-sayyaf-video-ransom
Posted by Retired Analyst at 4:31 AM