'This successful test flight proves that this airport is equipped with the capacity to ensure the safe operation of large civilian aircraft,' says official Xinhua news agency 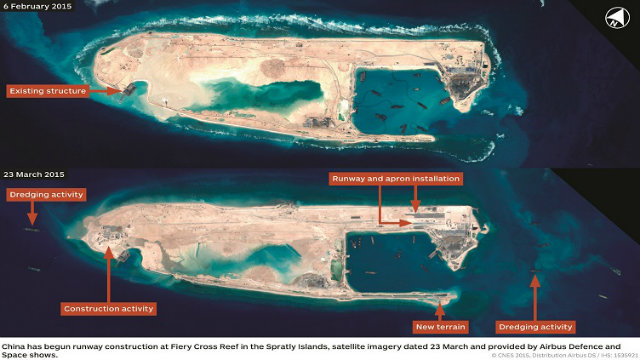 The planes departed from and returned to the city of Haikou, the capital of the southern island province of Hainan – a two-hour journey each way.

"This successful test flight proves that this airport is equipped with the capacity to ensure the safe operation of large civilian aircraft," said Xinhua.

It said the facility would help transport supplies, personnel and medical aid.

China claims virtually all the South China Sea, while the Philippines, Vietnam, Malaysia, Brunei and Taiwan also have partial claims. (READ: Q and A: Is South China Sea now a superpowers' battleground?)

China has asserted its claim by rapidly building artificial islands, including airstrips said to be capable of hosting military jets.

Several other claimants have also built facilities but at a slower pace, and China's activities have heightened tensions in the region.

Last Saturday, January 2 China said it had landed a civilian plane on the runway in an initial test flight – the first time it had been used.

That landing sparked a formal diplomatic complaint from Hanoi, which labelled it a violation of sovereignty.

The Philippine Department of Foreign Affairs has also said it would file a protest at the weekend incident.