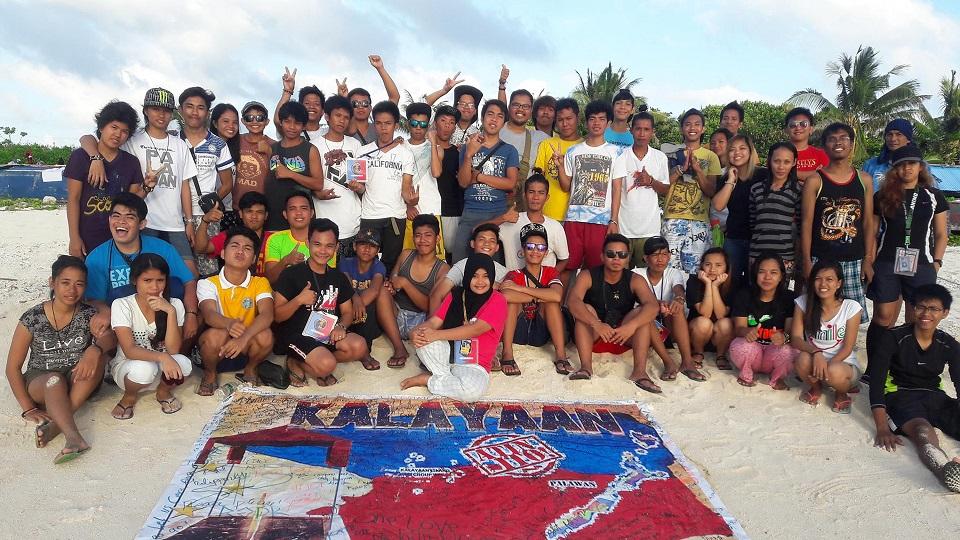 This photo taken on December 26, 2015, provided by a group called Kalayaan Atin Ito shows Filipino youth posing for a photo at the island of Pag-asa, also known as Thitu, part of the disputed Spratly group of islands, in the South China Sea located off the coast of the western Philippines. Almost 50 young Filipinos are camping on a remote Philippine-held island in the South China Sea in a symbolic stand against China's claim to most of the waterway, officials said on December 27. AFP PHOTO/Kalayaan Atin Ito

Almost 50 young Filipinos are camping on a remote Philippine-held island in the South China Sea in a symbolic stand against China's claim to most of the waterway, officials said Sunday.

Organizers of the group, calling itself Kalayaan Atin Ito, said 47 of them arrived Saturday on the island of Pag-asa, also known as Thitu, in the Spratlys chain.
Kalayaan is also the name of the township established by the Philippines in the Spratlys to assert its claim to part of the island chain.

The government had opposed the landing, initiated by a former navy officer. But Communications Secretary Herminio Coloma Jr. said Sunday that Malacañang understood the group's intentions.

"We recognize the patriotism of these youths that made them venture out," he told reporters.

But Coloma also reiterated that they should seek "alternative ways" to show their support, expressing concern for their safety in traveling the 500 kilometers (310 miles) from Palawan to the tiny island of Pag-asa.

Pag-asa Island is the biggest island occupied by the Philippines in the disputed Spratlys Islands chain in the South China Sea. China claims almost all of the sea despite conflicting claims over certain territories from the Philippines, Brunei, Malaysia, Vietnam and Taiwan.

According to the group, the 47 volunteers now on the island range in age from 15 to 27 years old.

The group said its members arrived on Pag-Asa Island around 9 a.m. on Saturday.
Earlier in the day, Kalayaan Atin Ito posted a photo on its Facebook page showing a row of tents set up on the shore. The post, which was geotagged at Pag-Asa Island, Spratlys, bore the caption: “Wala [nang] sasaya pa sa pag-apak sa sarili nating dalampasigan. Maligayang December 27, 2015 mga kababayan!”

Photographs and messages from the group posted on their website showed them posing on a beach.

A message on the group's Facebook page also urged Aquino to "inform the people correctly without sugar-coating the truth about Chinese invasion of our Exclusive Economic Zone."

Members of the group had previously accused the government of not doing enough to stand up to China.

A coordinator of the group, Joy Ban-eg, told AFP the 47 men and women had arrived on Saturday on a chartered launch and would depart on Monday.

She said China had not attempted to block them from reaching the island, adding that they would consult the local residents and the military detachment.

But she stressed that their voyage itself was an act of defiance against China.

Lopez was also worried that the youth volunteers' voyage could weaken the country's arbitration case before the Permanent Court of Arbitration in The Hague, Netherlands.
China has refused to recognize the proceedings.


Despite having one of the weakest military organizations in the region, the Philippines has been the most vocal in challenging China's claims to the South China Sea.

http://www.gmanetwork.com/news/story/549213/news/nation/anti-china-group-sails-to-phl-held-pag-asa-island-in-spratlys
Posted by Retired Analyst at 7:13 AM