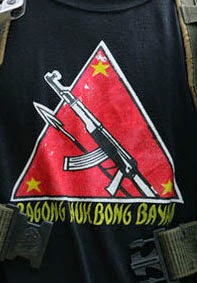 Ka Parago Sandoval, a spokesman for the NPA’s 1st Pulang Bagani Battalion, said rebel forces attacked soldiers in Paquibato and Calinan districts where at least 6 infantrymen were killed. He said rebels also ambushed an army vehicle transporting troops in the village of Malabog that left many casualties.

Two soldiers were also slain in sniper attacks in Sumimao and Dominga villages just this week. He said earlier in September, NPA fighters killed a government soldier and wounded three more in Fatima village and seized military backpacks and vests, including munitions, from a detachment of the 69th Infantry Battalion near Mapula village.

“The Army's rights abuses, ranging from harassment, red tagging, psychological warfare, encampment in civilian populace and intimidation, have earned them the ire of the masses. Despite being hated by Paquibato peasants and Lumads, and despite suffering from a high number of casualties, they continue to serve their corrupt and fascist masters in the AFP echelons and the landlord-bourgeois comprador class.”

“Their blind allegiance to corrupt generals and superiors at the 10th Infantry Division-Eastern Mindanao Command only makes them more easy targets of the New People's Army, people's militia and the revolutionary movement,” Sandoval said in a statement sent to the regional newspaper Mindanao Examiner.

There was no immediate statement from the Eastern Mindanao Command on the NPA claims.

The outskirts of Davao City are known stronghold of the communist rebel group. The rebels have been fighting for decades now for the establishment of a separate state in the country.