MORATORIUM APPLIES? The is set to repair the damaged Rancudo Airfield on in the disputed .

The Philippines on Friday, August 8, said its proposed moratorium on provocative actions in the South China Sea will not stop it from upgrading its airstrip on the Spratly Islands in the disputed waters.

In a media briefing, Philippine Department of Foreign Affairs (DFA) spokesman Charles Jose explained that upgrading the airstrip on Pag-asa Island, found in the Spratlys, will not disrupt the status quo in the South China Sea. (READ: Hitches in repair of PH airfield in Spratlys)

He said this means the upgrade will not violate paragraph 5 of the 2002 Declaration on the Conduct of Parties (DOC) in the South China Sea – the basis of the moratorium sought by the Philippines.

The DOC states under paragraph 5 that the parties “undertake to exercise self-restraint in the conduct of activities that would complicate and escalate disputes,” and will refrain from inhabiting “presently uninhabited islands, reefs, shoals, cays, and other features.”

When asked if the Philippines will drop the upgrade because of the moratorium, Jose told reporters, “We have been occupying Pag-asa before the 2002 DOC, so any improvements there should not be a violation of the DOC.”

The moratorium is part of the Philippines' proposed triple action plan (TAP), a set of strategies to ensure peace in the South China Sea. (READ: PH to ASEAN: Curb 'specific' moves in South China Sea)

China the 'object' of moratorium

The Philippines said it will propose the TAP in the Association of Southeast Asian Nations (ASEAN) Ministerial Meeting in Myanmar from Friday to Sunday, August 10. (READ: Sea row looms as Southeast Asia talks begin)

The Southeast Asian country said at least 3 ASEAN member-states have supported the TAP.

China, however, rejected this, with a Chinese official quoted by Reuters as saying China “can build what it wants in the South China Sea.” The Asian giant said the Philippines is also defeating the moratorium's purpose by planning to upgrade its Spratlys airstrip. 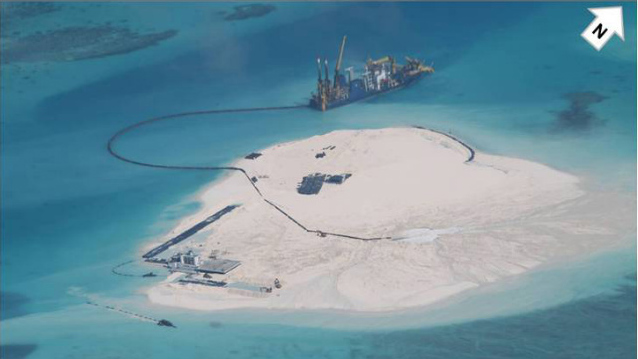 Philippines wants a moratorium on activities that raise tensions in the . This image dated Feb 25, 2014 shows 's reclamation activities in the disputed waters. Photo courtesy of DFA

He said China, after all, is the “object” of the moratorium proposed by the Philippines.

The Philippines crafted the TAP after China started building artificial islands in the South China Sea, which allegedly changes the status quo in the disputed waters.

Despite China's objection to the TAP, Jose said the Philippines remains optimistic about it.

For one, it “would be able to address the issue” of the lighthouses that China, according to Reuters, plans to build on 5 islands in the South China Sea.

Jose said the Philippines will bank on the consensus among ASEAN countries.

If China still rejects the TAP, but ASEAN countries reach a consensus to heed it, Jose explained: “At least one good thing is that we know that our concerns are being shared by other ASEAN member countries, and that they also recognize the exacerbating tension in the region, and that we should take on measures that would deescalate or manage the tension, to create the atmosphere that would lead to the eventual resolution of the disputes.”

He added, “We hope that ASEAN, if we all agree, to be able to convince China to agree to the cessation of activities that escalate tension.”

Posted by Retired Analyst at 4:15 AM