The clashed lasted for about 30 minutes and there was no report of military or civilian casualties, but it was not immediately known if any of the gunmen had been killed, although soldiers recovered blood-stained automatic weapons left behind by rebels, according to Maj. Gen. Jose Faustino Jr., chief of the Eastern Mindanao Command.

“The skirmish resulted in the recovery of one AK-47 assault rifle, two M16-A1 automatic rifles with an M203 grenade launcher, one M653 automatic rifle, ten backpacks, five bandoleers with ammunition, and a commercial transceiver radio set,” he said. 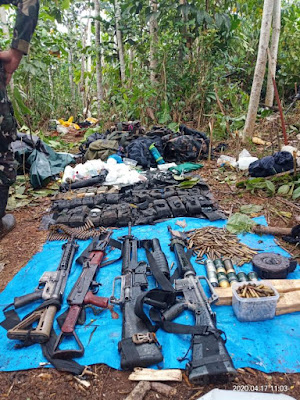 Faustino said fighting also broke out Thursday in Campawan town in Davao Oriental’s Baganga town where 2 rebels were slain by soldiers securing municipal social workers. He said troops were serving security for government health and social workers after rebels threatened to kill them. No soldiers or civilians were hurt in the fighting.

“Let us ensure that the implementation of the Social Amelioration Program in geographically isolated and disadvantaged areas will not be hampered and shall reach its intended recipients,” he said.

The NPA has been fighting the government for many decades now for the establishment of a communist state in the country. (Mindanao Examiner)