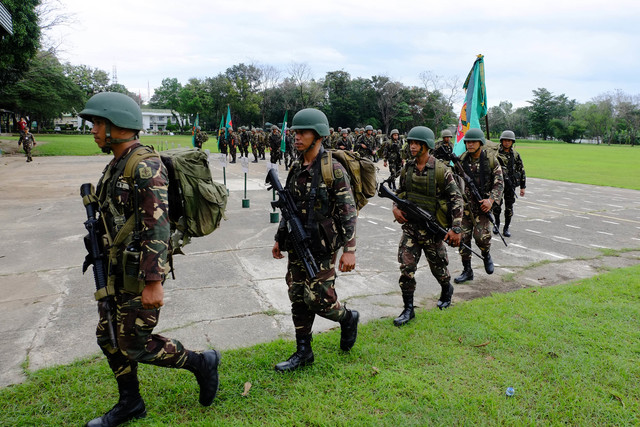 Military offensives against the New People’s Army (NPA) have officially resumed and will continue despite the coronavirus pandemic, the Armed Forces of the Philippines (AFP) said on Friday, April 17.

The government’s unilateral ceasefire that was declared parallel to the lockdown of Luzon island and many other parts of the country lapsed at 11:59 pm on Wednesday, April 15, and combat operations against NPA guerrillas resumed on Thursday, April 16, said AFP spokesperson Brigadier General Edgard Arevalo in a statement.

The Communist Party of the Philippines, the parent organization of the NPA, extended its unilateral ceasefire until April 30 after it lapsed on Wednesday.

Duterte earlier extended the lockdown of Luzon island until April 30, but he has not said anything about extending the government’s ceasefire.

Rappler asked Malacañang whether the President would reciprocate extending the truce, but Palace officials had yet to respond as of this posting.

In his statement, Arevalo slammed the CPP's “temerity” in writing the United Nations a letter complaining of alleged ceasefire violations by the military.

The National Democratic Front of the Philippines (NDF), the political wing of the CPP, wrote to UN Secretary General Antonio Guterres on Monday, April 13, accusing the AFP of launching 13 attacks against the NPA since March 16, when Duterte first called for a ceasefire.

Arevalo called the accusations “bogus,” and said the AFP has counted a total of 17 ceasefire violations by the NPA itself.

The marine general echoed earlier statements by military and defense officials wary of agreeing to a truce with communist rebels, saying the NPA tends to use ceasefires to regroup, harass civilian communities, and even attack unsuspecting military and police troops.

On April 1, Lorenzana accused the NPA of violating the truce by attempting to attack Army troops in Rodriguez, Rizal, on March 28. The Army said it had “thwarted” a planned offensive by the rebels, which resulted in a battle that killed one soldier and one rebel.

NDF leader Luis Jalandoni denied the accusation and said it was the military that “went looking for trouble” then.

On Friday, the military reported two more clashes with the NPA – one in Davao Oriental and another in Agusan del Sur – following an earlier skirmish in Sorsogon that the AFP reported on Thursday.

At least two NPA rebels were killed in the encounter in Sitio San Francisco, Barangay Campawan, Baganga municipality, Davao Oriental, at around 11:20 am on Thursday, said a report from the Philippine Army’s 67th Infantry Battalion.

The firefight between Army troops and around 30 guerrillas lasted about 30 minutes. Soldiers recovered 3 AK47 rifles, an M16 rifle, and 3 explosives from the scene.

At around 6:35 am on Friday, the Army’s 3rd Special Forces “Arrowhead” Battalion clashed with around 30 NPA rebels in Sitio Mikit, Barangay San Martin, Prosperidad town in Agusan del Sur.

The encounter also lasted about 30 minutes, after which soldiers recovered an M203 grenade launcher and several AK47, M653, and M16 rifles from the rebels. Bloodstains on the clash site indicated casualties among the rebels, the Army 3rd Special Forces said in a media statement.

On Thursday, the AFP reported an armed encounter between the Army’s 31st Infantry Battalion and the NPA in Barangay Tongdol, Irosin town in Sorsogon. One guerrilla was killed in the 10-minute firefight.

Tense from the start

It was Duterte who first asked the NPA for a ceasefire on March 16, the eve of the “enhanced community quarantine” or lockdown of Luzon island as a means to slow down the coronavirus pandemic.

He said the military and police needed to focus on addressing the pandemic, and so he sought a reprieve from the fight with the rebels.

The truce was officially declared on March 18, and military troops were ordered to stand down on March 19.

Doubting Duterte's sincerity, the CPP-NPA-NDF did not reciprocate the truce until a week later, March 25, after the UN called for a global cessation of hostilities amid the pandemic.

Defense Secretary Delfin Lorenzana then warned the military to remain on guard against the NPA despite the ceasefire. CPP founding chairman Jose Maria “Joma” Sison likewise told the NPA to keep watch against the military even during the truce.