'It is not what we do; it is not what is right,' says former foreign secretary Albert Del Rosario, urging the Duterte government to reconsider its decision 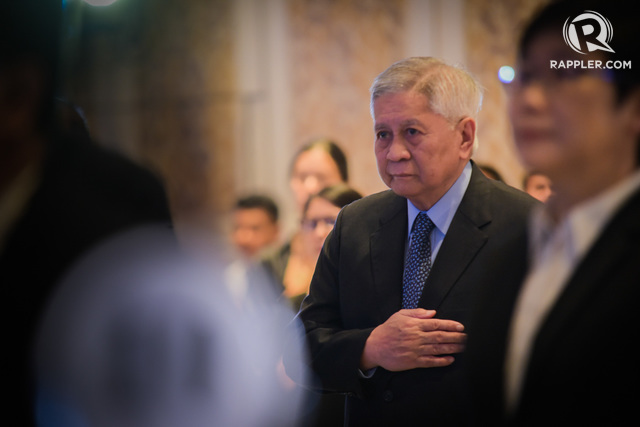 "This continuing shift in foreign policy casting aside a long time reliable ally in favor of an aggressive neighbor that has been blatantly demonstrating its lack of respect for international law is incomprehensible and harmful to our country and our people," Del Rosario said in a statement.

"What is unfolding before us must be considered a national tragedy which should be resisted. It is our earnest hope that this most unfortunate decision to abrogate can be revisited," he added.

Del Rosario had earlier urged Duterte to meet with US President Donald Trump to discuss the Philippines' bilateral ties with the US.

He warned the termination of the VFA could likewise "be viewed as ultimately putting an end to the Enhanced Defense Cooperation Agreement (EDCA) and the Mutual Defense Treaty (MDT)," which experts viewed was a deterrent to China's expansionist claims in the South China Sea.

The former foreign affairs chief noted it was in thus in the best interests of the Philippines to reconsider its abrogation of the VFA, as he called on Congress and the Supreme Court to assert checks and balances in light of Duterte's decision. (READ: Guevarra: PH will survive without VFA with Americans)

"Our people must take a stand. We appeal to our esteemed institutions such as Congress and the Supreme Court to lead us," he said.

What happened? The Philippines on Tuesday, February 11, sent its formal notice to the US government that it was terminating their 21-year-old military pact after Duterte put the agreement on the line over Senator Ronald "Bato" Dela Rosa's canceled US visa.

US defense chief Mark Esper said the termination of the agreement is a "move in the wrong direction," while the US embassy said the Philippines' move would have "significant implications" on relations between the two countries.

Foreign Secretary Teodoro Locisn Jr suggested that possible negotiations could take place with the US, though there has been no clear or official word from the Philippine government about it.

Against national interest. Del Rosario earlier said that while the VFA is "imperfect," it is "essential" for the two countries' decades-old defense alliance.

The VFA is seen as a crucial agreement to implementing the 1951 MDT, which sees the US and Philippines commit to defend one another in case of an armed attack in areas including the South China Sea.

Del Rosario, who was foreign secretary when the Philippines took China to court, warned terminating the VFA would actualize Duterte's pivot to China.

"We must be with responsible nations with whom we share our core values of democracy, respect for human rights, and the rule of law. To stand otherwise is not what Filipinos are; it is not what we do; it is not what is right," he said.

With the Philippines' formal notice signed, termination will take place 180 days or 6 months after the US received written notification. Until then, the agreement remains in force. – Rappler.com

Read these other stories on Duterte's decision to terminate the VFA:

https://www.rappler.com/nation/251636-vfa-termination-national-tragedy-albert-del-rosario#cxrecs_s
Posted by Retired Analyst at 7:13 AM