(UPDATED) Losing the Visiting Forces Agreement would be a setback in countering China’s aggression in the Asia Pacific region, says US Defense Secretary Mark Esper 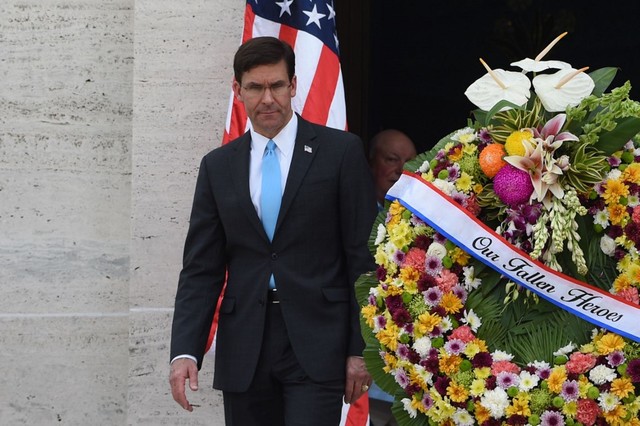 PENTAGON CHIEF. US Secretary of Defense Mark Esper during the wreath-laying ceremony at the American Cemetery in Manila on November 19, 2019. Photo by Ted Aljibe/AFP

(UPDATED) – US Defense Secretary Mark Esper found it “unfortunate” that the Philippines is withdrawing from its Visiting Forces Agreement (VFA) with the US, and called it “a move in the wrong direction” if the goal is to deter China from fulfilling its expansionist plans in the Asia Pacific.

Esper spoke to reporters onboard a flight to Europe on Tuesday, February 11, hours after President Rodrigo Duterte ordered to officially notify the US government of his plan to abrogate the VFA.

“We just got the notification late last night. We have to digest it. We have to work through the policy angles, the military angles. I'm going to hear from my commanders. But you know, in my view, it's unfortunate that they would make this move. As you all know, as some of you know, I was just there,” said Esper who visited Manila in November 2019.

In Manila, Esper had urged the Philippine and other Southeast Asian governments to be more assertive of their sovereign rights against China’s use of coercion and intimidation to advance its national interests.

The Philippines’ move to scrap the VFA would significantly reduce the presence of US military troops in the country, which analysts believe to have somehow deterred China from further occupation of the West Philippine Sea, particularly the strategic Panatag (Scarborough) Shoal off Zambales province.

“I do think it would be a move in the wrong direction as we both bilaterally with the Philippines and collectively with a number of other partners and allies in the region are trying to say to the Chinese: ‘You must obey the international rules of order. You must obey, you know, abide by international norms,’” he added.

The US is the Philippines’ only treaty ally. The two countries’ Mutual Defense Treaty of 1951 binds each to come to the other’s aid in case of an armed attack from a foreign aggressor. The VFA, which provides legal cover for the presence of US troops in the Philippines, “gives flesh” to the treaty, according to Philippine Foreign Secretary Teodoro Locsin Jr.

The Philippines was a US colony until 1946. Since gaining independence, it had largely outsourced its external defense to the US, which had military bases in the Philippines until 1991. In 1995, China occupied Panganiban (Mischief) Reef off Palawan. Some analysts said the absence of US forces gave China room to claim disputed features in the South China Sea, including the Philippines’ exclusive economic zone within it, called the West Philippine Sea.

In 1998, the Philippines and the US signed the VFA, which the Philippine Senate ratified in 1999. It paved the way for the rotational presence of US troops, joint exercises, and strategic cooperation between the two countries’ militaries.

As China moved in further in recent years, having reclaimed and militarized 7 reefs in the West Philippine Sea, the US increased naval patrols and port calls with the Philippines and other allies whose territorial claims have been sidelined by China.

The US and China are locked in a global contest of economic and strategic power, which has largely played out in the Asia Pacific where they battle for influence over smaller, less influential states like the Philippines.

“As we try and, you know, bolster our presence and compete with them in this era of great power competition, I think [the VFA’s termination] is a move in the wrong direction for the longstanding relationship we've had with the Philippines for their strategic location, the ties between our peoples, our countries,” Esper said on Tuesday.

Duterte, who had often spoken negatively of the US, ordered to terminate the VFA on January 23, after his political ally Senator Ronald “Bato” dela Rosa confirmed that his US visa had been canceled.

Dela Rosa’s visa appears to have been canceled as part of sanctions based on the US Senate’s application of the Global Magnitsky Act to operators of Duterte’s violent “war on drugs.” Dela Rosa, as Duterte’s first police chief, had launched and carried out “Oplan Tokhang,” the campaign that has killed at least 6,000 people by government estimates, or more than 20,000 according to rights advocates.

The Senate urged Duterte to reconsider his order, and Locsin warned that cutting the VFA would largely be contrary to Philippine interests, but Duterte on Tuesday officially ordered Locsin to notify the US government of the termination.

Some members of the Armed Forces of the Philippines told reporters that they disagreed with the VFA’s abrogation, and that they would lose valuable training and assistance from their US counterparts.

For the US, scrapping the VFA would mean a massive pullout of troops from a crucial outpost in their strategic cover in the region, because the Philippines straddles the South China Sea and the Pacific Ocean.

An Enhanced Defense Cooperation Agreement (EDCA) still allows the US military a rotational presence in certain Philippines bases, but it is unclear how it could be implemented without the VFA.

“But look, we just got the notification last night. We've got to read it. We've got to digest it. One hundred and eighty days. We've got to work through it, and we'll just take a deep breath and take it one day at a time,” Esper said.

In a statement on Wednesday, February 12, Presidential Spokesperson Salvador Panelo refuted Esper's remarks, saying Duterte's decision to terminate the VFA was a "move in the right direction that should have been done a long time ago."

He maintained Duterte's decision to do so was in line with the Philippines' "independent foreign policy."

The VFA will remain in effect for 180 days after the official notice is received by the concerned party. In a tweet, Locsin hinted at negotiations, but there is no clear or official word from the Philippine government about it.

https://www.rappler.com/nation/251608-us-defense-chief-says-terminating-vfa-move-wrong-direction#cxrecs_s
Posted by Retired Analyst at 7:07 AM