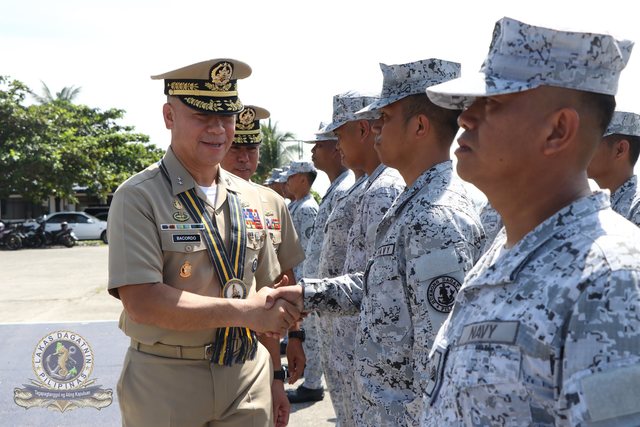 The commander of the Philippine Fleet, Rear Admiral Giovanni Carlo Bacordo, has been appointed by President Rodrigo Duterte as the new chief or Flag Officer-in-Command of the Philippine Navy, Defense Secretary Delfin Lorenzana confirmed to reporters on Friday, January 31.

Bacordo will replace Vice Admiral Robert Empedrad in a change-of-command ceremony at the Navy headquarters in Manila on Monday, February 3, when Empedrad reaches the military's mandatory age of retirement of 56.

Before his appointment as Philippine Fleet commander in April 2019, Bacordo led the following units:

Bacordo also served as Naval Staff for Operations, N3, from 2013 to 2014, during which he planned and oversaw the Navy's operations in the Sabah crisis; encounters with Chinese vessels in Ayungin and Panatag shoals in the West Philippine Sea; the deadly sinking of the passenger ferry MV St Thomas Aquinas; the siege of Zamboanga City by Moro rebels; the earthquake in Bohol; and Super Typhoon Yolanda (Haiyan).

In 2006, as the first director of the Center for Naval Leadership and Excellence, Bacordo led the drafting of the Navy's Strategic Sail Plan 2020.

As the new Navy chief, Bacordo will lead the drafting of a new sail plan as the Navy sets about acquiring new warships and other assets as part of the Armed Forces of the Philippines' (AFP) Modernization Program.

The Navy will be the focus of the AFP's upgrades in the next several years, as the Philippines faces the challenge of securing its maritime borders from extremists entering through Sulu Sea in the south, and Chinese vessels occupying the West Philippine Sea.

"We are confident that Rear Admiral Bacordo's extensive experience, impeccable service record, and proven expertise will propel our navy forward as it continues to modernize, improve its capabilities, and face maritime security challenges of our country," the DND said in a statement on Friday.