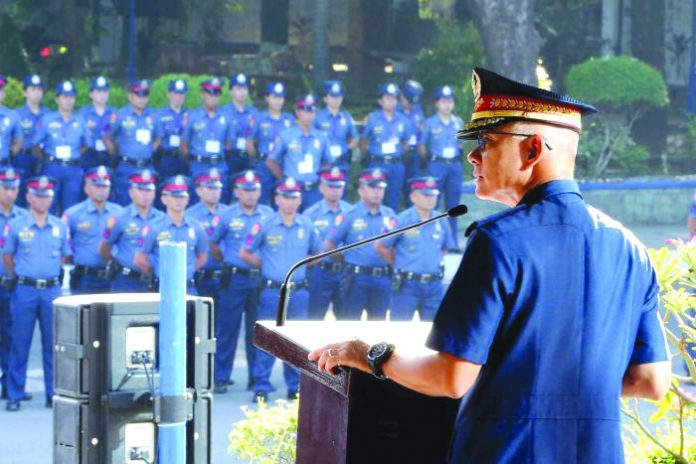 “After careful thought and deliberation, I have come to the decision to relinquish my post and go on a non-duty status,” Philippine National Police chief General Oscar Albayalde. Albayalde announces during a flag-raising ceremony at Camp Crame on Monday. PNP VIA AP

Philippine National Police (PNP) chief General Oscar Albayalde stepped down from his post on Monday – earlier than previously announced – as he battled allegations he protected his men accused of selling seized narcotics.

“After careful thought and deliberation, I have come to the decision to relinquish my post as Chief PNP effective (on Monday) and go on a non-duty status,” Albayalde said during a flag-raising ceremony at Camp Crame.

The embattled police chief said he already submitted his resignation letter to Interior secretary Eduardo Año, who endorsed it to President Rodrigo Duterte.

“Since I am retiring compulsory on Nov. 8, 2019, this will pave the way for the appointment of my replacement should the President so desires,” Albayalde said.

His classmate, Lieutenant General Archie Gamboa, deputy chief for administration of the PNP was named as officer-in-charge (OIC).

Gamboa said that, as the PNP OIC, he will continue the program that was started by Albayalde until President Duterte chooses who will become the next PNP chief.

“Ipagpapatuloy ko ang programang nasimulan ni General Albayalde,” Gamboa said. “I’d like to address to entire PNP that this is a temporary sequence of events, this is a transition, let’s do our job on a daily basis and let’s not other controversies affect us.”

Meanwhile, Sen. Richard Gordon said he feels sorry that Albayalde had to resign over the ninja cops issue but added this action should allow the police organization to reexamine itself.

According to Gordon, not even Albayalde’s resignation can save him from the cases to be slapped against him.

Gordon also said that his Blue Ribbon Committee will come out with its recommendation of cases to be filed against Albayalde and other “ninja cops” later this week.

During his resignation speech in the flag-raising ceremony at Camp Crame on Monday morning, Albayalde has reiterated his denial on the involvement in the alleged recycling of illegal drugs seized in operations.

“On the matter of the Senate investigation in regard which I have been implicated, I want to reiterate that I am not involved in the irregularities in the said police operation,” Albayalde said.

Albayalde allegedly intervened to stop the dismissal of Police Lieutenant Colonel Rodney Raymundo Baloyo and 12 other policemen from Pampanga who were found guilty of grave misconduct in connection with a drug operation in the province in 2013, retired general Benjamin Magalong said during the Senate hearing.

Another retired general in Rudy Lacadin, for his part, bared in a Senate hearing that Albayalde had called him and said that he only got a small portion on the controversial buy bust operation conducted by police officers in Pampanga in November 2013.

Albayalde was the chief of Pampanga police when the 13 police officers allegedly let suspected drug lord Johnson Lee flee in exchange for P50 million while most of the 200 kilos of shabu confiscated during the operation were not declared and presumed to have been sold back to the drug market.

Albayalde denied allegations that he was involved in any way with the operation and that he intervened in the implementation of a dismissal order on the 13 police officers involved.

Presidential spokesperson Salvador Panelo said that Albayalde “could have enough” of the allegations against him forcing him to tender his resignation ahead of his mandatory retirement.

“I can only speculate that he has had enough of the innuendos, the accusations, according to him which are false and unfair, the faily is suffering from it so he decided to have an earlier turnover,” Panelo said in an interview with CNN Philippines.

https://www.panaynews.net/albayalde-relinquishes-post-gamboa-takes-over-as-oic-pnp-chief/
Posted by Retired Analyst at 10:54 AM