Duterte to 'fill up' Negros Island with military troops

From Rappler (Aug 6, 2019): Duterte to 'fill up' Negros Island with military troops

'I will never declare martial law, except in Mindanao because it is really needed there, because of rebellion,' says President Rodrigo Duterte, as he ruled out a martial law declaration in Negros Island 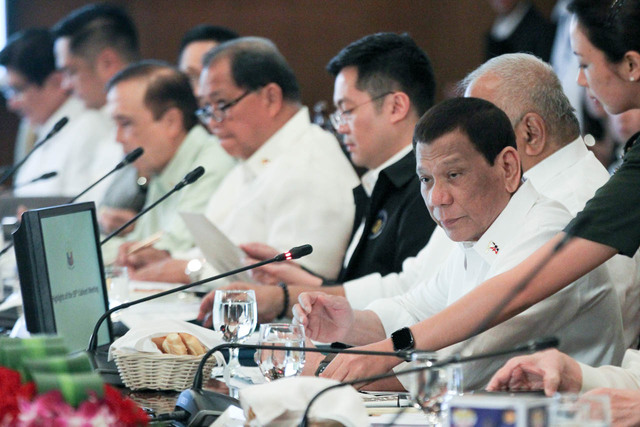 President Rodrigo Duterte clarified that the "drastic" action he would take to quell violence in Negros Island is not martial law but "filling up" the area with soldiers.

"'Pag sinabi kong drastic action, punuan ko ng sundalo katulad ng Sulu (When I said drastic action, I will fill it up with soldiers like in Sulu)," Duterte said during the oathtaking of officers of the League of Cities of the Philippines and Liga ng mga Barangay in Malacañang on on Tuesday, August 6.

In December 2018, Duterte had activated a new army division, the 11th Infantry Division, in Sulu to boost the government's fight against Muslim extremists and bandits there, specifically the Abu Sayyaf Group which has sworn allegiance to the Islamic State (ISIS).

The President said he would never declare martial law is Negros as he felt it wouldn't be that helpful anyway. Deploying more soldiers to an area would yield the same results, he said.

"I will never declare martial law, except in Mindanao because it is really needed there, because of rebellion," he said in a mix of English and Filipino.

In a Palace news briefing earlier on Tuesday, Presidential Spokesman Salvador Panelo said Duterte ruled out declaring martial law in Negros since the situation was not yet tantamount to a state of rebellion.

The island has seen a rise in killings over the past weeks, including the murder and supposed torture of police personnel which outraged Duterte and which police claimed was the work of the New People's Army, the armed wing of the Communist Party of the Philippines.

But he floated yet another measure should a new security situation in the country arise.

"If it is really something which gumaganon ang bayan (making the country go this way), I might declare another thing. That is for you to guess what it will be," said Duterte.

He did not elaborate. In the past, however, he has said he would declare a revolutionary government if "destabilization" efforts against his administration escalate.

Duterte had also said in April that he would declare a "revolutionary war" and arrest all his critics if he is pushed to a corner.

He had been slammed back then for being paranoid and for equating legitimate dissent with efforts to overthrow him.

https://www.rappler.com/nation/237199-duterte-to-fill-up-negros-island-military-troops
Posted by Retired Analyst at 6:59 AM