CCTV cameras catch the culprit placing the bomb – and the explosion that followed – right outside Carlitos Chicken restaurant in Isulan, Sultan Kudarat 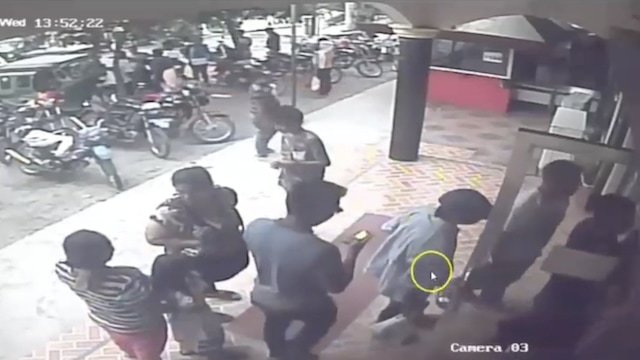 CAUGHT ON CAMERA. The bomber of the Sultan Kudarat restaurant is captured on CCTV cameras as he planted the bomb and left. Screenshot from sourced video

MANILA, Philippines – The culprit behind the bombing of Carlitos Chicken restaurant in Isulan, Sultan Kudarat which left at least 18 injured was recorded by CCTV cameras as he placed the bomb inside the restaurant. The blast was captured as well.

He entered at around 1:52 pm, shuffling as he made his way inside Carlitos, which was bustling with people at the time.

He was able to find a seat near the windows of the restaurant, sitting down by himself at the end of a long white table. At 1:54 pm, he stood up and went to the restaurant's comfort room.


According to Soccsksargen police chief Brigadier General Eliseo Rasco, the culprit only "pretended" to go to the toilet. He also did not order food at all, but only did some chitchat with people inside.

At 1:55 pm, he went back to his seat, then walked out a minute later. The footage shared by police shows that he only carried the blue plastic bag when he went out.

The improvised explosive device (IED), Rasco said, was inside the white plastic bag.


At 1:58 pm, the bomber slipped the white plastic bag between the space of an air conditioner's compressor and the wall of the restaurant. Around an hour later, at 3:04 pm, the bomb exploded, covering a peaceful scene in smoke then revealing it already in carnage seconds later.

Rasco said it was a good thing that the bomber left the IED by the wall, as opposed to inside the restaurant, since this led to the blast being "contained." (READ: PNP: Extortion 'probable motive' behind Sultan Kudarat blast)

"Kung naiwan 'yun sa loob, nako ang taas ng casualties (Had the white bag been left inside, the casualties would have been higher)," Rasco said.

Of the 18 injured, the youngest was 7 years old and the oldest 41. All appear to already be in stable condition, Rasco said.

With the leads, cops are now looking for more CCTV videos and witness testimonies based on the exit point of the bomber.