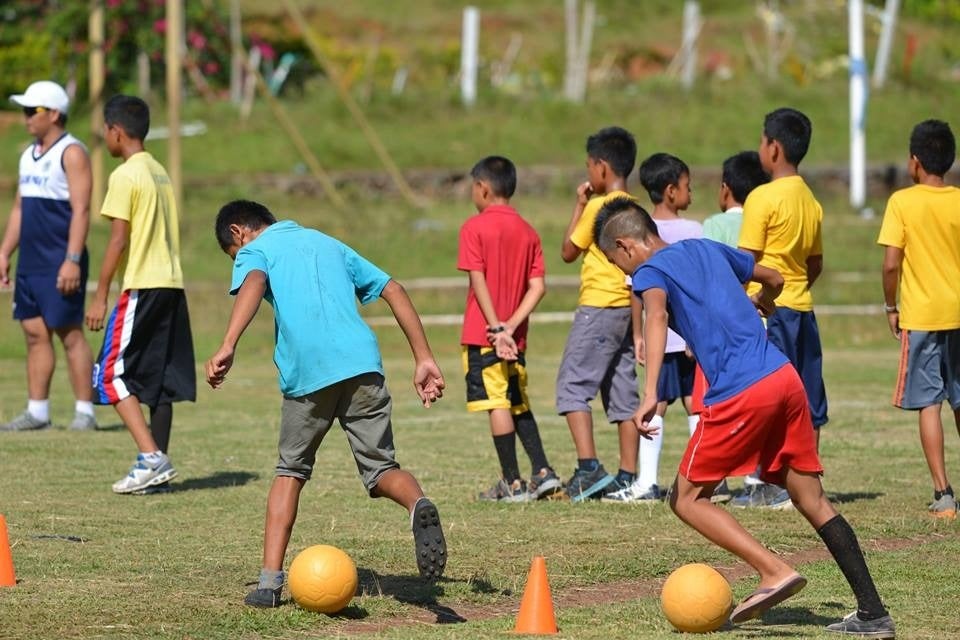 A battle-tested Marine who spent most of his years in combat at war-torn southern Philippines has a goal in mind: shield children from taking up arms through sports. He has taken initial steps, but he’s looking for more ways to keep the ball rolling.

Lt. Col. Stephen Cabanlet is the brainchild of Football for Peace, which started out in Sulu in 2011 as a form of pastime for soldiers on a break from combat. But he also saw it as an opportunity to gain the trust of children living nearby a detachment who got curious of the sport.

This is how the Marines, little by little, started teaching children in Sulu on how to play the game. It later drew support from the entire Philippine Marine Corps and had the program institutionalized to all its units in the field. Soon enough, they were holding tournaments in Manila with the help of private individuals and other organizations.

“The short-term objective of the program was simple, expose the children from the conflict areas to things other than war and violence by bringing them to Manila in the guise of playing football and hope that they will remember such experience,” Cabanlet said in a forum at the Asian Institute of Management in Makati early this week.

He believed that by giving children this kind of experience, they will be acquainted with a life away from conflict and think twice in taking up arms.

Children are the most vulnerable in conflict in areas like Sulu. At times, some of them are recruited at an early age to become fighters of extremist groups like Abu Sayyaf.

A report published by the Office of the Special Representative of the UN Secretary-General for Children and Armed Conflict in 2018 revealed that there were 30 recorded cases of recruitment and use of children by armed groups, mostly linked to the Maute group in 2017.

The United Nations International Children’s Emergency Fund and the Moro Islamic Liberation Front in 2017 completed the action plan to end recruitment and use of children, with 1,869 children disengaged from the MILF’s armed forces.

“This is the reality in Sulu; as young as 8 years old they are recruited to become lawless. At their young age they know how to assemble and use gun and know more about combat than child’s play,” Cabanlet said.

“The children being used against us are hard to combat because no matter what culture or religion we belong and believe in, children will be children: innocent, vulnerable, and helpless,” he also said.

And this is the reason why he wants to push new boundaries for the Football for Peace program. He dreams of putting up a sports academy in Mindanao someday to boost the potential of children and dissuade them from joining lawless groups. But he can’t do it alone.

“The biggest and most ambitious part of Football for Peace program is the establishment of a sports academy in Mindanao that will not only provide sports training but also academic programs for the children so they will become part of the government instead of becoming lawless,” he said.

But Cabanlet also knew he likewise needed the support of the children’s parents. After all, it takes a village to raise a child.

“I need the cooperation of the community if I wanted to raise non-violent, patriotic children,” he said.

While he is trained for war and just as tough like any other Marine, Cabanlet believes in “smart power,” or the use of the right combination of hard and soft power in achieving military objectives. He is an advocate of building bridges instead of walls for long-term successes in the community.

It has been three months since he finished his 20-month stint as battalion commander of Marine Battalion Landing Team-1 in Sulu, which was awarded as Best Marine Battalion for two consecutive years.

Apart from the required combat operations, he applied soft power through the conduct of humanitarian missions along with his Football for Peace program to be closer with the community.

“The lack of basic services was addressed during two-day festivities where medical, surgical, and dental (missions); sports festival; workshops; supplemental feeding; and livelihood trainings were conducted that benefitted everyone in the community,” the Marine officer explained.

With the help of civilian volunteers he gathered from different parts of the country to help out in humanitarian missions, it became an effective strategy for him to get the people of the community, at least some of them, on their side.

“How effective is smart power as a tool? Without question, I believe it is effective at least in my 20 months stint as battalion commander,” Cabanlet said.

“Gaining the trust of the community swayed them to our side. Getting their trust became our protection from getting ambushed and having our detachment harassed. The people themselves gave us good and reliable information that we were able to use to capture and neutralize lawless individuals,” he added.