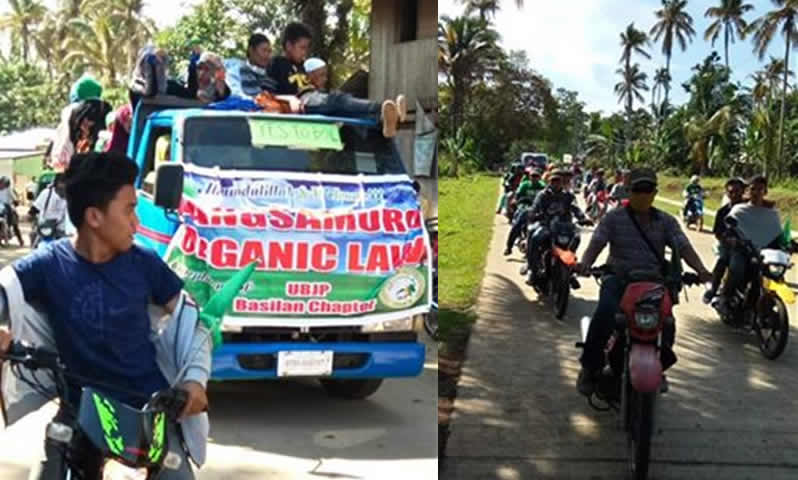 Sakib J. Abdalul one of the organizers said, "The objectives of this activity are for peace, harmony and tolerance to prevail over prejudice, and violent-conflicts being carried out by extremist groups".

The mistrust still exists between Moro and non-Moros with the bitter memories still entrenched in their minds, he said.

With the ratification of the BOL we will achieve peace and harmony, Abdalul added.

In an interview with one of the participants Basit A. Malun who was on board in his XRM 125 Motorbike with his wife from Sumisip, he said, " As a farmer we come here at our own expenses just to join this event to show our strong support for the ratification of the BOL. I strongly believed the Bangsamoro government can uplift the living conditions of the Bangsamoro especially the indigent groups like farmers and fisherfolks, "he added.

Thousands of participants joined the event including fisherfolks, farmers, women and many others. The event started moving at 6:00AM from Maluso municipality south-western part of the province towards east coast of Sumisip, and went further east of Ungkaya Pukan and Tipo-Tipo.

The convoy continued moving towards east-north of Tuburan then turned left, and moved further towards Lamitan.

From Lamitan, they headed north-west to Isabela City. When the convoy was about to enter Isabela City, they were stopped at the check point in Barangay Baluno around 11AM by an Army officer who confiscated the permit from the CCCH. The participants were stranded for almost an hour at the military checkpoint.

It was found out that there were lapses on the part of GPH- CCCH as they failed to inform the Brigade commander in Basilan about the motorcade despite a request letter for permit sent a long time ago.

Some of the participants became emotional but with resilience to pursue the peace caravan, they remained persevere. They entered Isabela City when the barricade was opened, moved towards Lantawan Municipality then further down south to Maluso where the convoy started.

Despite the incident at the military checkpoint, the activity was generally peaceful and successful. The participants were happy and in high morale, with high hopes and prayers that yes votes will win in Isabela City, and Basilan during the ratification of the BOL few months from now.