From The Diplomat (Sep 29): Mayhem in Marawi (By Zachary Abuza)

Is the Philippines up to the task of handling the latest wave of Islamist terrorism? 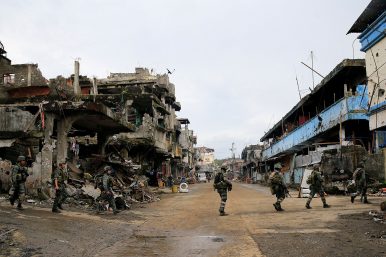 Image Credit: Romeo Ranoco, Reuters
On May 23, a unit of the Armed Forces of the Philippines (AFP) operating on a tip, moved in on a safehouse in the southern Philippine city of Marawi, where a top Abu Sayyaf leader, Isnilon Hapilon, was said to be holed up. It was a setup. What was supposed to be a quick operation turned into a four month quagmire, with a death toll of some 147 members of the security forces and 45 civilians. Like the botched Mamasapano raid in January 2015 that led to the death of 44 Philippine National Police Special Action Forces, this was a tactical fiasco with strategic consequences. The Philippines is once again seen as the weak link in regional security, at a time when the Islamic State has lost nearly 90 percent of its territory in Iraq and Syria and is seeking local conflicts in the post-caliphate era. With a city in rubble, and the majority of its 400,000 population still displaced, angry, and not confident in the government’s ability to rebuild it and prevent future attacks, Moro grievances continue to grow, as new groups proliferate and metastasize.

Starting in March 2016, Abu Sayyaf began a campaign of maritime kidnapping, taking 65 sailors and fishermen from six separate countries in maritime operations. Two more individuals were killed during ship-boardings, and scores more were either not taken or released. But the spate of maritime attacks put significant diplomatic pressure on the Philippine government, which acquiesced to the demands of Malaysia and Indonesia to establish joint maritime patrols, and ceded the right of hot pursuit into Philippine waters.

Abu Sayyaf then attempted a raid in the resort region of Bohol, in the otherwise peaceful Visayas, in April 2017. While the AFP had claimed success in driving Isnilon Hapilon and his men out of Basilan, they had little understanding of why they moved to Marawi, in the Marano-dominated region of Lanao del Sur.

Hapilon was the first Southeast Asian to declare his allegiance to the Islamic State, done in a YouTube video in July 2014. In the following months, at least six other Philippine-based groups followed suit. The government and AFP repeatedly downplayed the threat, as late as mid-2017, calling them “ISIS wannabes.”

In part this was because the Islamic State did not immediately recognize any of the groups. Finally, in January 2016, Al Naba, a central ISIS media organ, stated that ISIS had established a “branch” in Southeast Asia and recognized Hapilon as the Emir of Islamic State militants in Southeast Asia, and called on other cells, including Ansar al-Shariah, Ma’rakah al-Ansar, Ansarul Khilafah Philippines, and al-Harakatul al-Islamiyyah, which is based in Basilan, to act as “battalions” under his command.

[Read the full story here, in The Diplomat   Subscription required for full article.]
https://thediplomat.com/2017/09/mayhem-in-marawi/
Posted by Retired Analyst at 6:18 AM