From Rappler (Feb 8): AFP to hold 'localized peace talks' with communist rebels
'I'm sure there are so many NPA who want to go back to the mainstream. Let's give them the chance. Hindi naman lahat ng NPA gusto makipaglaban,' says AFP chief Eduardo Año 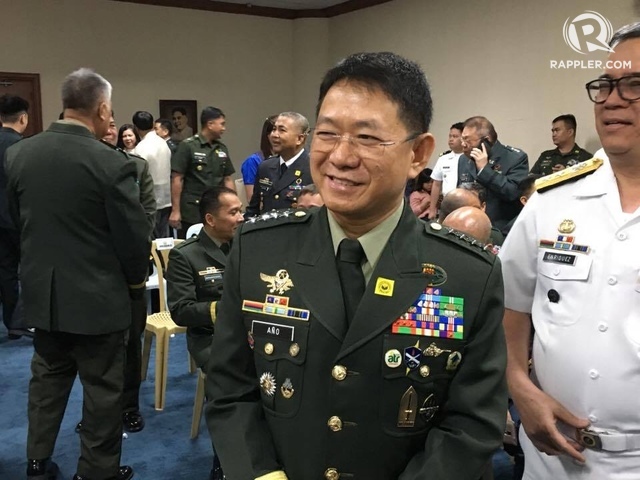 He said this is not a new initiative as the military has done this even before the resumption of peace talks with the National Democratic Front (NDF) under the Duterte administration.
Asked about the prospects of having localized talks, Año told reporters after the hearing: "Yes, that is one alternative – localized peace talks. In fact, there are some local NPA commanders who are willing. Even during the ongoing peace negotiations, some of our commanders are talking to these NPA commanders. But we cannot disclose their identities."

The AFP chief expressed confidence that not all members of the New People's Army (NPA), the armed wing of the Communist Party of the Philippines (CPP), favor the group's decision to end the ceasefire with the government.

"I'm sure there are so many NPA who want to go back to mainstream. Let's give them the chance. Hindi naman lahat ng NPA gusto makipaglaban (Not all NPA want to fight)," Año said.

The AFP chief was apparently referring to the military's Internal Peace and Security Plan or Oplan Bayanihan, a strategy it adopted in dealing with the NPA during the administration of then president Benigno Aquino III.

Under Oplan Bayanihan, the AFP sought to convince rebels to give up their arms and return to mainstream society by offering them livelihood programs.

Who decided on ending ceasefire with gov't?

Referring to Jorge "Ka Oris" Madlos, who announced the termination of the NPA ceasefire with the government on February 1, Año said he was not sure if this was based on the decision of CPP founder Jose Maria "Joma" Sison, or CPP top leaders Benito and Wilma Tiamzon.
"'Yung decision ni Jorge Madlos (Regarding Jorge Madlos' decision), we don't even know if it's the decision of the Tiamzons or Joma. But it was Madlos who talked to the media and made the announcement. Hindi lahat ng NPA pabor doon sa ginawa niya (Not all members of the NPA favor his move)," the AFP chief said.

The government responded by lifting its ceasefire with the NPA by midnight of February 3, the same day President Rodrigo Duterte ordered it.

The Aquino administration had also pursued localized peace talks with communist rebels, after negotiations with the NDF got bogged down by what the government called the latter's "unrealistic demands."

These demands included the release of NDF consultants covered by the Joint Agreement on Safety and Immunity Guarantees (JASIG), and the scrapping of the Conditional Cash Transfer program and Oplan Bayanihan.

At the time, the names of the consultants were contained in a floppy disk kept by a third party, which was discovered to be corrupted and impossible to encrypt. The NDF pushed for the reconstitution of the list but the Aquino administration opposed it.
http://www.rappler.com/nation/160810-afp-ano-localized-peace-talks-npa
Posted by Retired Analyst at 12:11 PM