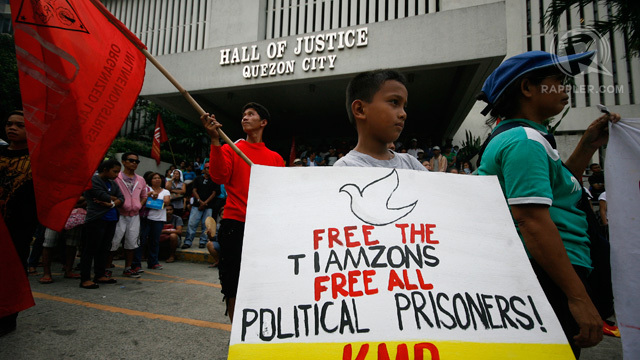 NDF CONSULTANTS. A rally outside the Quezon City Hall of Justice calling for the release of the Tiamzons. Rappler file photo

At least two more members of the National Democratic Front (NDF) are “set to be released” by Monday, August 15, as peace talks between the government and the Communist rebels are set to begin on August 22 in Oslo, Norway.

The two are part of the 11-member NDF delegation that will be part of the peace talks, according to the office of Presidential Adviser on the Peace Process Jesus Dureza said in a release to media on Sunday, August 14.

Based on a list of 22 NDF consultants whose temporarily liberties are being sought for the peace talks, there are two members with cases pending before the Tagum City Regional Trial Court. One is facing serious illegal detention charges while the other faces raps for the illegal possession of firearms.

Both are supposedly protected under the Joint Agreement on Safety and Immunity Guarantees (JASIG), which guarantees NDF negotiators “immunity from surveillance, harassment, search, arrest, detention, prosecution and interrogation or any other similar punitive actions due to any involvement or participation in the peace negotiations.”

Dureza’s office noted that “3 local courts in Visayas” granted the same motion for another consultant, but they did not say which court granted the motion and for whom it was filed.

The government panel welcomed these developments, with panel member Angela Librado-Trinidad noting the importance for the NDF panel to be completed once peace talks begin.

Labor Secretary and chief negotiator Silvestre Bello III urged the public “not to be swayed by the sharp exchanges” between President Rodrigo Duterte and members of the NDF.

Recently, the Communist Party of the Philippines (CPP), announced its withdrawal of support for Duterte’s war on illegal drugs. Duterte and CPP founder Jose Maria Sison traded barbs over the media, after the breakdown of a unilateral ceasefire that Duterte announced during his first State of the Nation Address.

The NDF is the political umbrella of the CPP and the New People’s Army. Sison, who is in exile in the Netherlands, is currently the NDF’s chief political adviser.

“We have no doubt in our mind that the president is determined to pursue peace negotiations with the NDF. We have to understand that both parties will try to come to the peace table with our own and respective agenda and formula,” added Bello.

The Supreme Court had earlier thumbed down the Duterte’s administration’s appeal for the release of the NDF members, but only because it said it did not have jurisdiction over the cases, which were still being heard by lower courts.

More motions are expected to be granted this week.

http://www.rappler.com/nation/143028-peace-talks-release-ndf-negotiators
Posted by Retired Analyst at 7:10 AM