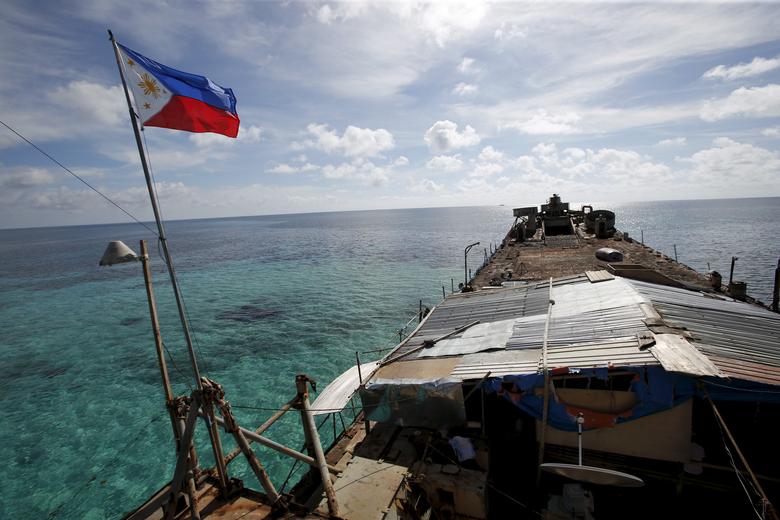 A Philippine flag flutters from BRP Sierra Madre, a dilapidated Philippine Navy ship that has been aground since 1999 and became a Philippine military detachment on the disputed Second Thomas Shoal, part of the Spratly Islands, in the South China Sea March 29, 2014. Picture... REUTERS/Erik De Castro

China will be the 'loser' if it does not recognize an international court ruling against its territorial claims in the South China Sea, Philippine Foreign Minister Perfecto Yasay said on Tuesday.

An arbitration court in The Hague infuriated China in July when it ruled that China had no historical title over the South China Sea and it had breached the Philippines' sovereign rights.

China has ignored the ruling that none of its claims in the disputed Spratly Islands entitled it to a 200-mile (320 km) exclusive economic zone. Its construction work on reefs there has alarmed other claimants, as well the United States and Japan.

"We are trying to make China understand especially when the dust settles that unless they respect and recognize the arbitral tribunal, they will be the losers at the end of that day on this matter," Yasay told a congressional hearing.

Prior to starting bilateral talks, the Philippines plans to seal a deal for China to allow Philippine fishermen to access the resource-rich waters, Yasay said.

China seized Scarborough Shoal in 2012, denying Philippine fishermen access, one of the factors that prompted Manila to seek arbitration.

"When we start formal negotiations or bilateral engagements with China, we will have to do it within the context of the arbitral decision. There are no buts or ifs insofar as our policy on this matter is concerned," Yasay said.

China claims almost the entire South China Sea, through which more than $5 trillion of trade moves annually. Brunei, Malaysia, the Philippines, Taiwan and Vietnam also have claims in the sea, believed to be rich in energy deposits.