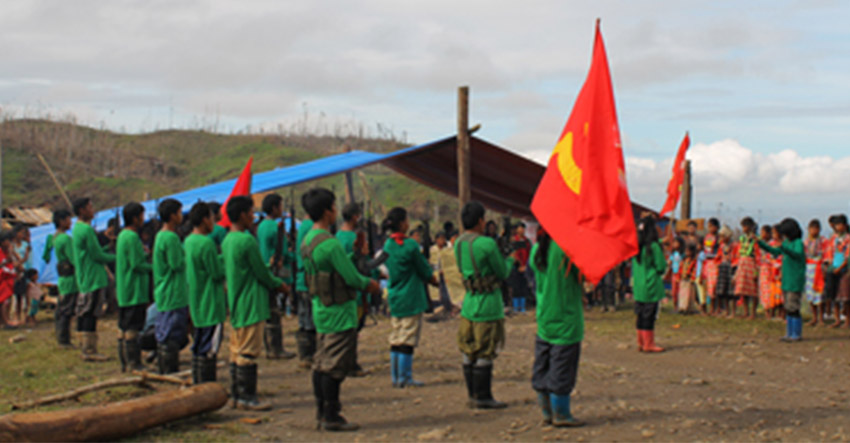 New People’s Army in Mindanao. (File photo)
The 30th year commemoration of the EDSA People Power was met by a series of military offensives by the New People’s Army in the northeastern part of Mindanao.
In an emailed statement, Maria Malaya, spokesperson of the National Democratic Front said the NPA-NEMR has launched at least 19 attacks against military troops in Surigao del Sur, Agusan del Sur, Surigao del Norte, and Agusan del Norte starting Thursday, February 25 .

“These synchronized NPA attacks are launched underscoring its significance during the EDSA I celebrations because while the US-Aquino III regime boasts of its ‘peaceful revolution’, it is currently waging its brutal military attacks in the countryside,” said Malaya.

In his speech during the program for the commemoration of EDSA, President Benigno S. Aquino III encouraged the country’s youth to know the history of the EDSA People Power Revolution “to avoid a repeat of the dark years of Marital Law.”

Quoting the words of his mother, the late president Corazon Aquino, he said, “The problems we face are our generation’s making. It is our generation that has to correct them. Your role is to prepare yourselves better to avoid making the same mistakes.”

Today’s young people are free to dream, have careers and nurture their own families, things that were difficult to do during the Martial Law years, he said.

President Aquino said 40 percent of the poorest of the poor now have access to free medical care in government hospitals under his watch.

He said the Philippines has also recorded the lowest unemployment rate in the past 10 years, adding that the government has constructed many infrastructure projects that now benefit the people.

But Malaya refuted Pres. Aquino’s claim.  “Thirty years after EDSA, the big bourgeois comprador, big landlords, their US imperialist master and the political dynasties are still in power and monopolizing the nation’s economy.  Thus, the national democratic revolution remains to be the only solution,” she said.

She said the NPA’s tactical offensives show that the armed revolution is “imperative, because the so-called ‘peaceful people power revolution’ of EDSA was not able to provide for genuine solutions to the basic problems of the Filipino people.”

“Since the massacre of September 1, 2015 at Han-ayan Lianga, Surigao del Sur until present, the Armed Forces of the Philippines has launched continuously, intensifying and widespread attacks in NEMR against the revolutionary movement and the people. Several activists, leaders and civilians were killed, houses and schools burned, hundreds of thousands forcibly evacuated and other human rights violations inflicted,” said Malaya.

http://davaotoday.com/main/politics/npa-launches-at-least-19-offensives-in-mindanao-on-30th-edsa-anniv/
Posted by Retired Analyst at 12:34 AM