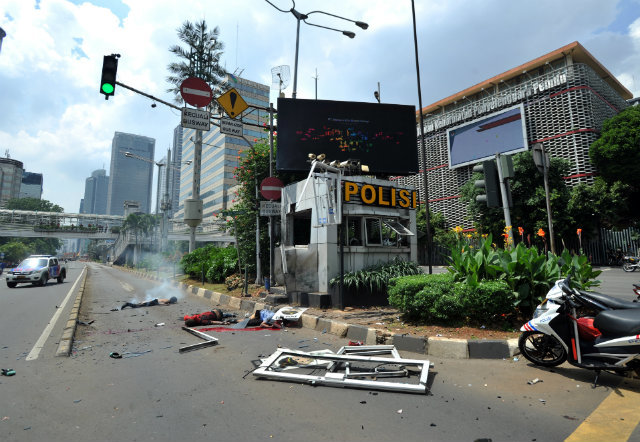 JAKARTA BLASTS. A general view shows the scene of a bomb blast at a police station in front of a shopping mall in Jakarta, Indonesia, on January 14, 2016. Photo by EPA

The Philippines on Thursday, January 14, denounced the explosions in Jakarta that killed at least 6 people, and said the country stands with their "Indonesian brothers and sisters."

“The Philippines strongly condemns the attacks in Jakarta in the morning of January 14, 2016, that claimed the lives of innocent people,” the Philippine Department of Foreign Affairs (DFA) said in a statement.

“We stand by in solidarity with our Indonesian brothers and sisters in this time of tragedy,” the DFA added.

At the same time, DFA spokesman Charles Jose said no Filipino was injured.

“Our Embassy in Jakarta has confirmed that there are no Filipino casualties in the explosion in Jakarta,” Jose said in a text message around 1:30 pm Thursday.


A series of bombs killed at least 6 people in Jakarta on the same day, with shots fired outside a café as security forces moved in, police and witnesses said.
The explosions were close to a shopping center, the Sarinah, where bodies were seen strewn on the ground.
The site of the explosions is around 5 minutes away, by car, from the Philippine ambassador’s residence.
Terror threats
Jakarta is the site of another explosion in 2000 that wounded then Philippine ambassador Leonides Caday.
A breakaway group of the Moro Islamic Liberation Front, a rebel movement in the Philippines, said it was responsible for that explosion in Jakarta in 2000. But later reports said the Al-Qaeda-linked Jemaah Islamiyah (JI) was responsible for the attack.
The Washington Post reported in March 2003 that the car bombing at Caday's residence was carried out by the same JI militants behind the explosion at two Bali nightclubs in October 2002.
The blast “killed two people and wounded 20 others, including Philippine ambassador Leonides Caday,” the BBC reported in August 2000. The ambassador suffered broken legs.
Caday died in November 2013 at the age of 83, GMA News said in a report.
Thursday’s bombs come just weeks after Jakarta was placed on high alert after anti-terror police foiled what they said were plans for a New Year suicide attack in the Indonesian capital.
Experts recently warned Southeast Asia about possible attacks by the terrorist group Islamic State (ISIS), which runs on the ideology that fueled Al-Qaeda.
(READ: 4 things you need to know about ISIS in Indonesia)
Rappler reported that ISIS may soon declare a province in the southern Philippines.
Southeast Asian expert Greg Barton told Rappler: “There is reason to be concerned that ISIS will succeed in inspiring a Paris November 13 style mass casualty attack in Southeast Asia in the coming year.”
“The Philippines is vulnerable,” Barton added, “because there is a very strong correlation between terrorist movements and lack of good governance. The south remains fraught with problems of governance and groups like the Abu Sayyaf have for decades been free to operate with a relatively high degree of freedom and lack of hindrance in their movements.”
http://www.rappler.com/nation/119020-filipinos-jakarta-explosions-dfa
Posted by Retired Analyst at 2:58 AM