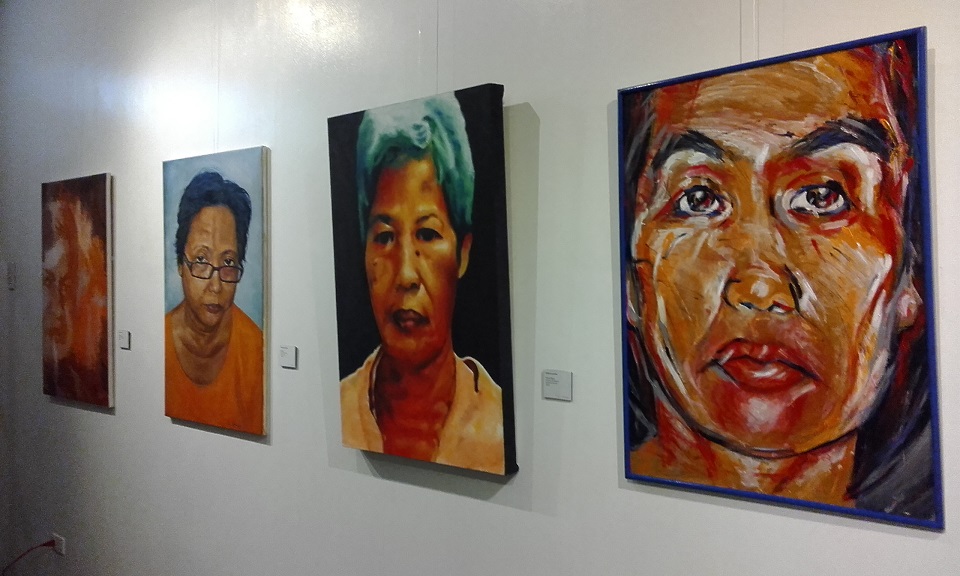 Some of the portraits on exhibit at 'PortrAYAL'.

“As art objects, portraits have traditionally been visualisations of the so-called ruling elite: objects denoting prestige, power and patronage; displays of individual stature and status, denoting the capacity to commission and consume,” said Lisa Ito, a lecturer at the Department of Theory, College of Fine Arts, University of the Philippines, Diliman.

This trend in the creative arts sector was interrupted by the launching of "PORTRAYAL: Faces of Freedom" art exhibit on July 24 at the Maximillian Gallery on Scout Madriñan in Quezon City.

The exhibition, organized by human rights groups Karapatan and Selda, displays 55 portraits of some political prisoners in the country, created by renowned local artists using various kinds of artistic media.

“Portrayal connects with previous artistic interventions in its aspiration to help set free the stories behind statistics on human rights violations in the Philippines.The process of linking both artist and detainee is a challenging and negotiated act of empathy: of venturing beyond fidelity to the visage and distilling their stories to the viewer. In instances where it was not possible to directly visit and meet the subject, the artists had to rely on secondhand information to produce the portraits: mug shots, I.D. photos, archival testimonies, case reports, and recollected memories, for instance,” explained Ito, who is also the curator of the exhibit.

Among the 537 documented political prisoners are National Democratic Front of the Philippines (NDFP) peace consultant Alan Jazmines and Eduardo Sarmiento, who are also visual artists and writers.

Jazmines was arrested on February 14, 2011, just a few hours before the resumption of the long-stalled peace talks, and despite the assertion of the Joint Agreement on Security and Immunity Guarantees (JASIG). His image is depicted in a painting by former UP Fine Arts Dean Leonilo “Neil” Doloricon. Doloricon is a recipient of the Thirteen Artists Award of the Cultural Center of the Philippines and of Manila's Patnubay ng Sining at Kalinangan Award.

In February 2009, Sarmiento was abducted by five men in plainclothes while walking along Star Mall in Alabang, Muntinlupa City. On December 11, 2013, Ka Edong was sentenced to reclusion perpetua and is now detained at the maximum security unit of the New Bilibid Prison in Muntinlupa. Art teacher and CAP member Renan Ortiz rendered an image of Sarmiento. Ortiz is also among the 2012 Thirteen Artists Awardees of the Cultural Center of the Philippines.

Free ALL Political Prisoners added a new photo — with Deogracias S. Iniguez and 21 others.

Free ALL Political Prisoners with Linangan Ng Kulturang Pilipino and 30 others
Cause · 1,804 Likes  July 19 at 7:07am·
45 Likes · 1 Comment · 4 Shares
“This diverse sourcing of images for visualizing the political detainee has yielded portrayals that convey not only the psychological weight of their stories but also the detainees’ prevailing sense of optimism and resolve amidst the odds they face. It is this spirit of resilience which remains unshackled and unrestrained, moving across and beyond the confines of prison space,” said Ito.

GMA News Online cartoonist Manix Abrera made a digital print portrait of Edward Lanzanas. The latter was arrested with the daughter of Gregorio “Ka Roger” Rosal.

The exhibit ran for two days but the artworks are set for display at the House of Representatives in August. Afterwards, they will be brought to schools and galleries in and outside of Metro Manila.
http://www.gmanetwork.com/news/story/529830/lifestyle/artandculture/freedom-s-face-won-t-blur-art-exhibit-shows
Posted by Retired Analyst at 4:15 AM