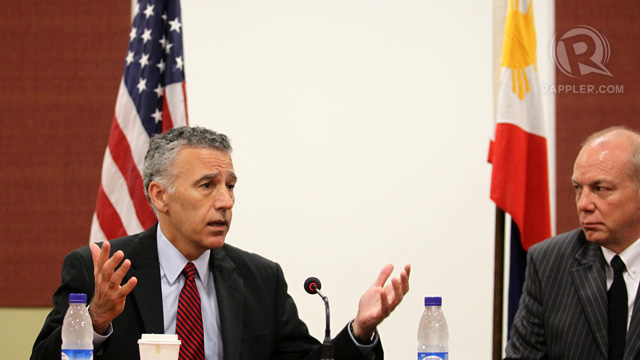 US Ambassador to the Philippines Philip Goldberg sat down with journalists to discuss the implementation of the Visiting Forces Agreement (VFA) in the wake of the killing of Filipino transgender woman Jennifer Laude allegedly by US Marine Private First Class Joseph Scott Pemberton.


The VFA gives Philippine courts jurisdiction over erring American servicemen while custody remains with the until the “completion of the judicial proceedings.” But the agreement also provides that the may request for custody in “extraordinary cases.”


Even before the death of Laude, the has been talking with the Department of Foreign Affairs and the Department of National Defense about clarifying implementation of various aspects of the VFA. But the Laude case has revived calls to amend or even abrogate the VFA itself.


Rappler's Carmela Fonbuena joined the roundtable with Goldberg on Friday, October 24. Here are excerpts of the discussion.


On the transfer of Pemberton to .


We need to always be conscious of the feelings here among people. We took this step – allowing within our custody under the VFA – a suspect to be moved to a sovereign Philippine soil. It is an unusual step, one meant to build confidence that we understand the situation here.


How is this different from the 2006 rape case of former Marine Lance Corporal Daniel Smith, who was detained inside the embassy?


I’m not going to comment on the earlier case, the Corporal Smith case. But what I will say is we went beyond, I think, our obligations under VFA by reaching an agreement with the that allowed the suspect to be moved to a facility at that maintains the principles of VFA – remaining under custody – but also did it in a way that's sympathetic to public opinion here. It is sympathetic to the government and judicial process here, assuring the people that the suspect will be here for the length of hearings and, possibly, if it will come to a trial.


Will the give the custody over Pemberton if and when a warrant of arrest is issued?


We'll follow the VFA and the VFA gives custody to the through the judicial process. I'm going to be very theoretical because nobody has been charged and nobody has been indicted. There is a suspect. But in a case such as one where a service person is involved, the retains custody and has obligations under the VFA to make sure that a person identified would then be present for all hearings and so forth, and the witnesses would as well. Those are our obligations under the VFA, and we intend to follow them just as we expect that all the provisions will be followed. We have to understand that we have a legally constituted agreement that is part of the rule of law and we are very interested in that. I know the Philippine is as well.


Does the transfer of Pemberton to shut down talks over custody issue?


We intend to follow the VFA. And the retains custody through the judicial process.


Do you consider this an ‘extraordinary case’?


I’m not going to judge. Certainly it might be a question or an appeal. But I can tell you that under VFA it is clear that the custody remains with the . They can make the request if that is what it says in VFA.


The has the option to say yes or no to any request from the for custody?


That is my understanding.


How does the interpret the phrase “completion of judicial proceedings”?


On Justice Secretary Leila De Lima’s statement that the executive branch is reviewing the implementation of the VFA because of ambiguous provisions.


The is free to raise any issues that they want but that doesn’t mean on the other side that it is immediately agreed to. There are two sides to an agreement. I think we should separate that from the current situation. The current situation is that we have to apply VFA as it is. We have enough clarity in the steps under way for example. The Philippine government has said, as we have, that custody goes to the and that jurisdiction will be applied here.


We need to follow the VFA at the moment. While we’re always open to talking to our friends and allies about these issues, this shouldn’t be done in the middle of something that we have to handle through rule of law. We can continue talking about it, but it’s not part of this process. It’s part of the process between the countries to clarify what these things mean. If the wants to bring additional things to the table as the Secretary of justice suggested, that’s the ’ right.


On proposals to abrogate the VFA.


I can’t imagine abrogating VFA but i don’t want to get into a political debate here. I took note that the President said, "No, it should not be." We believe it should not be. From my point of view, it’s an agreement and it shouldn’t be abrogated. It allows us to do something that’s important for both countries. That is to ensure mutual security and to carry out exercises.


Last year in we were able to deploy as quickly as we did [in the aftermath of Typhoon Yolanda] because we have a VFA. We wouldn’t put soldiers, airmen, sailors, marines into a situation where there is no certainty about process and what happens, and the rights and obligations. We do this all around the world.


On the involvement of the Naval Criminal Investigation Service (NCIS).


Our work to date through the VFA has allowed us to identify the suspect, identify witnesses, to cooperate and collaborate with the Philippine National Police. And quite frankly I don't know if that would have happened if it hadn't been for our cooperation with investigators from the NCIS.


This case may not have been resolved as quickly or as effectively without our cooperation. That’s a very important point. It is our obligation obviously, but it is also our instinct. Our instinct is to actually pursue justice. i think most people who know the and the military would agree with that proposition.


What constitutes justice for Jennifer Laude?


Somebody is a suspect at the moment and hasn’t been accused of a crime. What constitutes justice is that if a crime occurs, that the person or people responsible are found. I’m speaking hypothetically here because I don’t want to talk about a particular person because nobody has been accused of anything at this point, but that first, the facts are established. There is a judicial process that is good and is according to law. Justice is served by finding the truth and punishing those who are responsible for crimes. That is what we are committed to doing in this or any other case.


On the rights of the Marine as a suspect.


We’re sympathetic to the Filipino people but we also have to observe the rule of law and our obligations to a member of the armed services. This is the commitment we make to the American people and American Congress, to do those things as government representatives.


How will the case affect EDCA?


On EDCA, we have an agreement and I understand it's before the Supreme Court here for consideration on certain legal grounds. I'm really not in a position to comment because it's in a court here. But it's a fully legal agreement as far as we are concerned. We went to great lengths when we negotiated the EDCA to make sure that the provisions of the EDCA from the Philippine side were constitutional. But that’s for the court to decide, not for me or anyone else.
http://www.rappler.com/nation/73052-verbatim-philip-goldberg-us-embassy

Posted by Retired Analyst at 12:14 PM