Photo of abducted German yachters in Philippines surfaces on Facebook 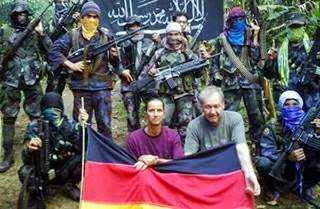 A photograph of two German yachters who disappeared at sea off Palawan Island in the Philippines has surfaced on the Internet and in the picture were masked gunmen believed to be members of the al-Qaeda-linked Abu Sayyaf group guarding them.

The picture - shared on Facebook - shows the yachters Stefan Viktor Okonek, 71, and Herike Diesen, 55, behind a German flag and surrounded by at least 10 gunmen in a forest and a black flag with an Arabic inscription can be seen in the background. It was not immediately known who posted the picture on Facebook, but Philippine television TV5 also ran a story about the photograph.

The duo was believed snatched at sea in April 25 while heading to Sabah after from a holiday in Palawan and they were reported missing after Filipino fishermen spotted their empty yacht.

There was no immediate statement from Filipino security officials or the German embassy about the authenticity of the picture. The Abu Sayyaf is still holding several foreigners and Filipinos kidnapped in southern Philippines.

Because of the abductions of the Germans, the United Kingdom warned its citizens in May against travelling to southern Philippines due to threats of terrorism and clashes between security forces and insurgents, and kidnappings.

Britain said there are several terrorist groups operating in the Philippines that continue to pose a threat. It said there is a threat from kidnapping, particularly in the southern Philippines where kidnapping could occur anywhere, including on coastal and island resorts and on dive boats and sites in the Sulu Sea.

Britain was referring to the two German yachters and the two European wildlife photographers Ewold Horn, 52, from Holland; and Lorenzo Vinciguerre, 47, from Switzerland, who were taken captive by in the coastal village of Parangan in Panglima Sugala town in Tawi-Tawi province two years ago.

Posted by Retired Analyst at 4:01 AM