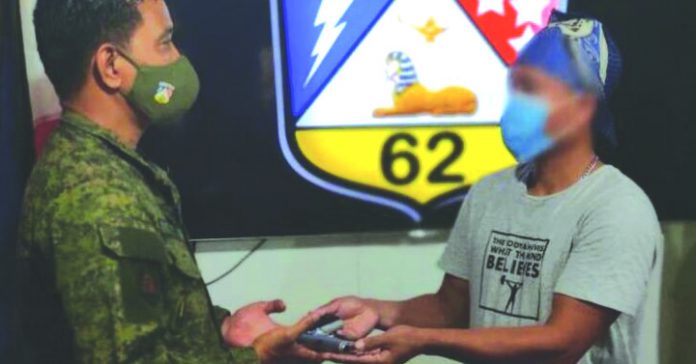 “Ka Dodong” turns over a .45-caliber pistol to Lieutenant Colonel Melvin Flores, commander of Philippine Army’s 62nd Infantry Battalion, at the battalion’s headquarters in Barangay Libas, Isabela, Negros Occidental on June 14. One of the reasons he surrendered along with his partner “Ka Lara” is their desire to live a peaceful life. 62ND INFANTRY BATTALION, PHILIPPINE ARMY VIA PNA

Two officers of the Communist Party of the Philippines-New People’s Army (CPP-NPA) in central Negros surrendered to government troops.

The former rebels were identified as “Ka Dodong” and “Ka Lara”, political instructor and medical officer, respectively, of the NPA’s SDG Platoon, Central Negros 2, according to the report of the Philippine Army’s 62nd Infantry Battalion.

Lieutenant Colonel Melvin Flores, commander of 62IB based in Barangay Libas, Isabela, Negros Occidental, said the couple decided to surrender on June 14 after they have learned about the government’s Enhanced Comprehensive Local Integration Program (E-CLIP) and because of their desire to live a peaceful life with their child.

The 62IB also said in its report that one of the reasons that prompted the couple to return to the fold of the law is due to the hardships, abuses and corruption they experienced inside the NPA organization.

“We assure the rebel returnees that they will be given financial support, legal assistance and livelihood package as part of their E-CLIP benefits,” Flores said.

“What we have gained is the gradual result of the whole-of-nation approach of the National Task Force to End Local Communist Armed Conflict. Let us continue to work hand-in-hand to successfully end the insurgency and to achieve an inclusive and lasting peace here in Negros Island,” Flores added.

The two surrendered to the troops in the presence of Flores and Captain Joseph Partidas, chief of the Isabela municipal police station, at the 62IB headquarters.

“Ka Dodong” also turned over a .45-caliber pistol, two magazines and 25 serviceable ammunition during his surrender.

They were identified as Hermosilla “Aya” Villamor, 45, member of Front Committee; and Teody “Koko” Manorte, 27, squad leader of SYP Platoon.