'We assure you that terrorism is not activism, and activism is not terrorism,' says National Security Adviser Hermogenes Esperon Jr 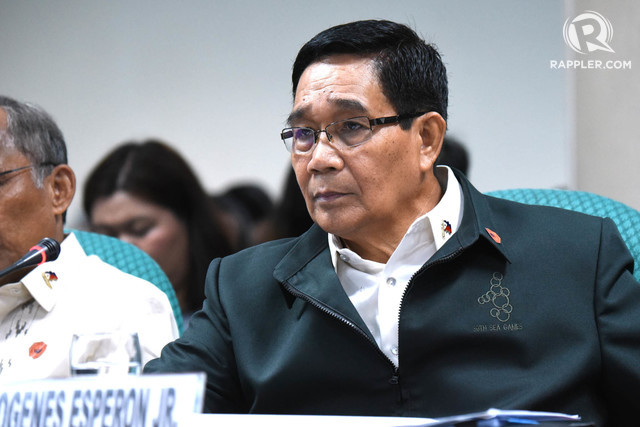 Eight Abu Sayyaf "sleepers" have been arrested in Metro Manila since 2019, said National Security Adviser Hermogenes Esperon Jr as he defended the enrolled anti-terrorism bill in a media conference on Monday, June 15.

The terrorists were identified as suspects in several kidnapping incidents in Basilan in the early 2000s, including the June 2001 siege of Lamitan, Esperon told reporters.

A 9th Abu Sayyaf sleeper – inactive but may be called to attack – remains at large, he added.
Mentioning this and terror attacks in the Philippines since the 1990s, Esperon attempted to justify the proposed Anti-Terrorism Act of 2020, widely opposed among the public as a crackdown on dissent and activism.

"Observably, the security perspective is often conveniently set aside in these debates and discourse as if the Philippines, as the only Southeast Asian country in the top 10 of countries most impacted by terrorism, is not alarming enough," the former military chief said.

"How about if we consider terrorism's human cost and its crippling impact?" Esperon added.

Although the rising death toll among military troops from encounters with terror groups is painful enough, what's worse is terrorists prefer to target civilian non-combatants in violent attacks, he said.

(I know your concerns, that's why I'm saying that this Anti-Terrorism Act is really geared at targeting terrorism. We assure you that terrorism is not activism, and activism is not terrorism.)

The proposed Anti-Terrorism Act of 2020 is set to replace the Human Security Act of 2007, which the military and other security officials dismissed as weak and cumbersome in addressing terrorism.

Compared to the old law, the new measure:
The proposed measure has faced strong opposition from activists, ordinary citizens, and some government officials. Calling the measure "draconian," critics say it effectively allows the government to tag dissenters as terrorists, and to arrest people on mere suspicion of "terrorism" given a broader definition.

Esperon said the proposed law itself contains safeguards against abuse by law enforcement or military agents, who may be jailed for 10 years for violating suspects' rights.


He also cited Section 4 of the measure, which states "terrorism as defined in this Section shall not include advocacy, protest, dissent, stoppage of work, industrial or mass action, and other similar exercises of civil and political rights."

The provision, however, includes the caveat that these liberties must not be "intended to cause death or serious physical harm to a person, to endanger a person's life, or to create a serious risk to public safety."

In the bill, the interpretation of the intention behind such actions is largely left to the Anti-Terrorism Council (ATC), which, under the new setup, would have the national security adviser – Esperon – as vice chair.

Under the measure, the ATC would also have broad authority to initiate the proscription or official identification of any group as a terrorist organization.

So far, only the Abu Sayyaf has been proscribed by a Philippine court as a terrorist group, but the administration has a pending petition to proscribe the communist-led New People's Army (NPA) as terrorists, too.

(Did we prohibit the rally on June 12? Then okay, go and protest. I used to do that, too, when I was in the Philippine Science High School. But not once did I call to bring down the government through armed struggle.)

On June 12, Independence Day, various groups led rallies to protest the anti-terrorism bill in different venues across the country.

Police initially blocked protesters entering the University of the Philippines (UP) Diliman campus, but the demonstration eventually proceeded without incident.

On June 8, police arrested 8 people at a rally at UP Cebu, also for supposedly violating community quarantine rules. They were protesting the anti-terrorism bill, too.

The proposed Anti-Terrorism Act of 2020, approved by Congress, is up for President Rodrigo Duterte's signature. The Department of Justice is reviewing the measure for constitutionality, and is expected to afterwards advise Duterte whether to sign it.

Esperon said he advised Duterte to certify the bill as urgent, which paved the way for its speedy passage in the House of Representatives.