Activist tagged by Army as terrorist fears for life

From the Panay News (Jun 27, 2020): Activist tagged by Army as terrorist fears for life (By Ian Paul Cordero) 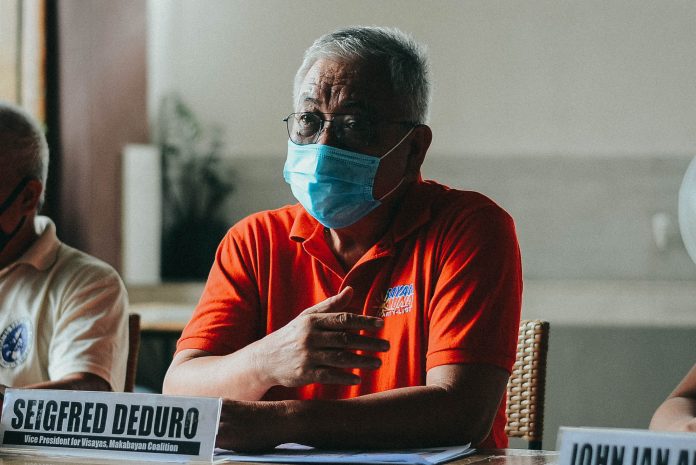 ILOILO City – During the meeting of the Regional Peace and Order Council at Casa Real de Iloilo City on June 19, the Philippine Army’s 3rd Infantry Division (3ID) included the Ilonggo vice president for Visayas of the progressive group Makabayan Coalition, Siegfred Deduro, in the terrorist list it presented.
Now, Deduro fears for his life.

“I vehemently condemn the inclusion of my name as a high-ranking member of the Communist Party of the Philippines (CPP) Komiteng Rehiyon (KR) Panay in the presentation of the 3ID,” stated Deduro in a statement.

He fears for his life, he said, because “it has been the pattern of impunity in extrajudicial killings and illegal arrest and detention victims under the Duterte administration that targets of military and police neutralization are first subjected to spurious accusation and vilification, like linking them to the revolutionary armed underground forces to condition the public.”

Deduro recalled that on Dec. 11, 2018 he was included in posters of so-called leaders of legal democratic organizations, alleging them as puppets of the CPP and New People’s Army (NPA).

The posters were displaced in strategic locations in Iloilo City.

The posters were again pasted around Iloilo City on March 16, 2019, said Deduro.

“This malicious scheme is aimed at eliminating legal opposition in the last years of President Duterte’s term,” he stressed.

He represented the Bayan Muna party-list in the 12th Congress from April 2003 to June 2004.

A founding member of Bayan Muna and the Makabayan Coalition, he served in concurrent capacity as vice president for Visayas since the founding congresses of these political organizations.

He was also a manager for five years of the Panay Fair Trade Corp., the biggest exporter of muscovado sugar in Panay Island.

In 1998, Deduro became the founding secretary-general of the Madia-as Ecological Movement that led the successful popular resistance against the entry of commercial mining in Panay Island.

He was part, too, of the human rights violations class suit filed against the late dictator Ferdinand Marcos that was decided in their favor in the United States District Court in Hawaii. The ruling was affirmed in 1996 by the US 9th Circuit Court of Appeals.

As a Martial Law survivor, Deduro was a qualified claimant under the Human Rights Victims Reparation and Recognition Act of 2013, which recognized the sufferings of those unjustly detained and tortured during the Marcos dictatorship.

“I demand due process and a halt to the military’s unjust accusation and vilification against me and my fellow activists. I demand a public apology from the 3ID for its irresponsible and baseless accusations,” said Deduro.