SULU – Governor Sakur Tan visited Saturday over a dozen wounded soldiers who clashed with Abu Sayyaf gunmen at a military hospital in the capital town of Jolo and handed them financial assistance, and condoling with security officials and troops for the brutal killings of 11 infantrymen in Sulu’s Patikul town.

Tan, accompanied by Lt. Gen. Cirilito Sobejana, chief of the Western Mindanao Command, and Maj. Gen. Corleto Vinluan, commander of the 11th Infantry Division, met with the soldiers one by one. 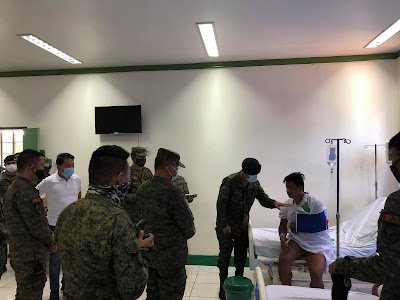 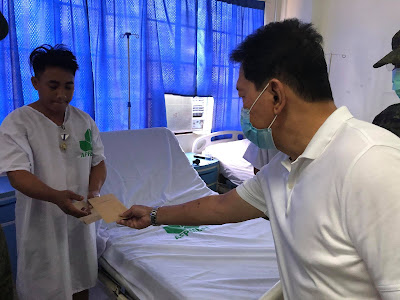 Sulu Governor Sakur Tan hands over financial assistance to all wounded soldiers at a military hospital in Jolo town on Saturday, April 18, 2020.

Tan has strongly condemned the Friday slayings of the soldiers, calling it barbaric and un-Islamic. “We strongly condemn this violence and the senseless war that has claimed many innocent lives and affected the lives of civilians and the peace and development efforts of our government,” he said.

Fierce fighting broke out in the village of Danag after troops encountered with dozens of militants under Hajan Sawadjaan, one of the most notorious Abu Sayyaf leader blamed by authorities for the spate of attacks and cross-border kidnappings in Malaysia’s state of Sabah.

Credit goes to the owner of this work.

Manila has also condemned the atrocities of the Abu Sayyaf. “We condemn in the strongest possible terms the latest incident in Patikul, Sulu, where members of the Abu Sayyaf Group believed to be under ASG leader Radullan Sahiron and Hatib Hajan Sawadjaan attacked government troops resulting in a firefight, which left 11 soldiers killed and 14 wounded.”

“The Office of the President expresses its sincerest condolences to the bereaved families left behind by our brave soldiers who fought hard and paid the ultimate sacrifice to secure our community. We honor and pray for the fallen,” said Presidential Spokesman Harry Roque.

It was the second deadly fighting since April 16 where three soldiers were also wounded and that many militants killed, according to Vinluan.

The fighting erupted amid the coronavirus pandemic and while soldiers were assisting in the government humanitarian and health efforts to control or prevent the spread of the deadly virus.

“The enemies of the State choose no date and occasion. They strike even during this time of great pandemic. But let this serve as a warning to all - our authorities remain ready and prepared to crush the enemies of the government and quell any armed attack amid the existing state of calamity and public health emergency,” Roque said.

Sobejana and the Philippine Army chief Lt. Gen. Gilbert Gapay also condemned the killings. “The Western Mindanao Command empathizes with the bereaved families of our fallen heroes who, with their intestinal fortitude, fought hard and braved the encounter against the Abu Sayyaf group in Danag, Patikul, Sulu at 3:05 p.m. (Friday). The Western Mindanao Command’s Joint Task Forces nevertheless sustain their security operations while they take the lead in the strict enforcement of the quarantine,” it said.

Media reports said the soldiers are members of the 21st Infantry Battalion and Scout Ranger, and among the dead was a lieutenant. News website Rappler reported that the soldiers lost seven R4 assault rifles, one grenade launcher and a K3 machine gun, including a radio transceiver to the Abu Sayyaf.

Gruesome photos of the slain soldiers posted on Facebook have since gone viral.

The Philippine Army honored the slain soldiers, calling them “heroes who sacrificed their lives to attain peace and stability in Sulu.”

“The Philippine Army is saddened with the events in Sulu today. While our troops are deployed all over the country supporting the National Effort against the NCOVID Pandemic, the fight against terrorism continues,” Gapay said.

“Today, we offer our sincere condolences to the family and loved ones of our 11 Sulu heroes who gallantly fought to the last breath against Abu Sayyaf terrorists. While it is a sad day for us, their sacrifices will inspire us to strengthen our resolve until we are free from terrorism. This setback will not deter us from performing our duty to serve the Filipino people and secure our land,” he added.

Security forces are battling the terrorist Abu Sayyaf group for the past 2 decades now and despite government efforts to lure them to surrender in exchange for livelihood and financial aid, its members continue to wage a violent campaign in the restive region.

Its leaders have pledged allegiance to ISIS or Islamic State in Iraq and Syria and vowed to put up a caliphate in Mindanao, one of the country’s three main islands largely populated by Christians, although the region was once under the powerful rule of the sultans. (Zamboanga Post)