Friday’s encounter with the Abu Sayyaf Group in Patikul, Sulu, was the deadliest battle the military has fought in a long while, says the Philippine Army 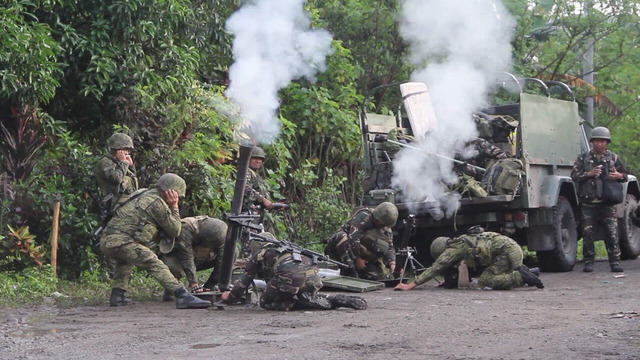 The national flag was flown at half-staff at military camps across the country on Saturday, April 18, as the Armed Forces of the Philippines (AFP) mourned 11 Army soldiers killed in a battle with the Abu Sayyaf terror group in Sulu on Friday, April 17.

It was the most devastating encounter for the military in a long while, Philippine Army spokesperson Colonel Ramon Zagala told Rappler. Skirmishes with armed groups in different parts of the country often cost the lives of a few soldiers, but Friday’s clash in the jungles of Patikul municipality, an Abu Sayyaf turf, had nearly a dozen troops pay the ultimate price.

The roughly 40 Abu Sayyaf members had the strategic advantage in the hourlong firefight. “The enemy had the advantage of familiarity with the terrain, and had dug-in positions when the Army troops on an offensive mission approached their lair,” Zagala said.

“Pursuit operations are ongoing, and the Army’s 11th Infantry Division (11ID) will continue its mission to bring security and stability as a partner for peace in Sulu,” he added.

The executive officer of the Delta Company of the Army’s 21st Infantry Battalion, under the 11ID, and 10 of his troops were killed in the encounter. They were:

At least 14 other soldiers were wounded in the battle. The Army requested not to publish their names to keep their privacy as they recuperate from their injuries.

The Abu Sayyaf Group (ASG) remains one of the most insidious security threats in the Philippines, especially in the southern region of Mindanao. The group's subleader Hatib Hajan Sawadjaan is known to be the leader of the Islamic State or ISIS terror network in the Philippines. Friday's battle involved militants under Sawadjaan and the ASG's top leader, Radullan Sahiron.

Although the ASG members fled the clash site, the military said bloodstains in the area indicated an undetermined number of casualties among them.

The Army and the AFP top brass pledged assistance and full benefits to the bereaved families.

“We offer our sincere condolences to the family and loved ones of our 11 Sulu heroes who gallantly fought to the last breath against Abu Sayaff Group terrorists in Barangay Danag, Patikul, Sulu,” said Philippine Army chief Lieutenant General Gilbert Gapay in a statement.

Although military troops are deployed all over the country to enforce community quarantine measures in response to the coronavirus pandemic, “the fight against terrorism continues,” Gapay added.