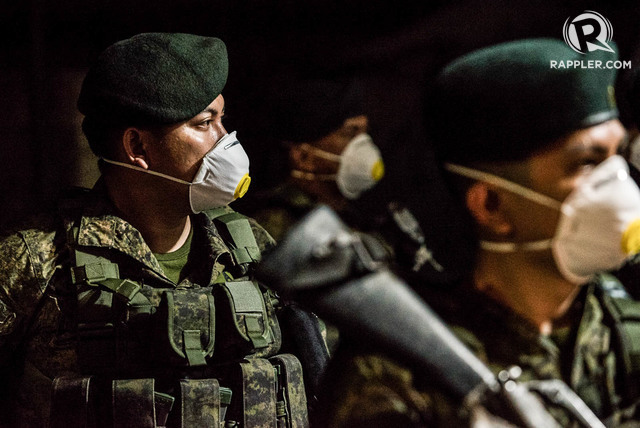 (UPDATED) – The defense department is at the helm of implementing the national government’s plan to address the coronavirus pandemic, and that largely involves the military.

But what help can the Armed Forces of the Philippines (AFP) offer in combating the spread of a virus?

In one of his first statements on the job, National Action Plan chief implementer Secretary Carlito Galvez Jr said the intelligence units of the military and police will be mobilized for contact tracing, a task that has officially been delegated to the Office of Civil Defense (OCD), which is under the Department of National Defense (DND).

The DND also supervises the military.

“Contact tracing” means identifying people who have had close unprotected contact with confirmed COVID-19 cases. Formerly called “persons under monitoring” (PUM), they are now officially termed “close contacts” by the government. This is according to an April 9 administrative order from the Department of Health (DOH) adopted last week.

On March 31, Galvez announced that the government was preparing to do “massive testing” of what were then called “patients under investigation” (PUI) for the novel coronavirus. The more tests are done, the more cases can be confirmed – and confirmed sooner – so that the National Task Force (NTF) against COVID-19 can immediately do contact tracing for PUMs, now called “close contacts.”

Those close contacts would then be monitored by barangay health emergency response teams for whether they would develop symptoms. In such a situation, they would be considered COVID-19 cases under a new classification system by the DOH, patterned after World Health Organization guidelines.

Galvez then said that “massive testing” would begin on Tuesday, April 14. A few days later, he said the DOH had, in fact, already begun massive testing – that is, testing more people for the coronavirus.

The new classification considers any person with flu-like or severe respiratory symptoms – formerly PUIs – as cases of COVID-19, distinguishing them more sharply from close contacts – formerly PUMs – who are not considered coronavirus cases.

Instead of just “PUI,” persons with flu-like or severe respiratory symptoms and who have had a history of exposure to people or places with the virus are now considered “suspect cases.” Those who have been tested by non-accredited laboratories or whose results are inconclusive are considered “probable cases.”

People tested by DOH-accredited laboratories whose results are positive are called “confirmed cases” of COVID-19.

“The beauty of the new classification is, a PUI is now already counted as a case [of COVID-19], which raises the level of intervention that can be done for them. Because they are considered coronavirus cases, they already warrant intervention,” AFP deputy chief of staff for Civil Military Operations, J7, Brigadier General Edgardo de Leon told Rappler.

Suspect and probable coronavirus cases are to be brought to local or national quarantine facilities where medical teams are on hand to monitor or treat them.

Where the military can help

Everyone who has had direct physical contact, or lived, worked, transacted, or traveled in close proximity – less than one meter – for more than 15 minutes with a confirmed COVID-19 case is considered a close contact.

All persons, including health workers, who provided direct care for a COVID-19 patient while not wearing personal protective equipment (PPE), are also considered close contacts.

As part of the NTF, the military can help barangay health response teams identify and locate these close contacts, and this is where their intelligence units can step in once they are tapped to help, De Leon said.

Military intelligence uses “link analysis” software applications to track down persons who are targets of security surveillance. This is to map out their relationships with fellow suspects and other relevant contacts.

It is this technical capability that the military’s intelligence personnel can lend to the contact tracing effort. It’s a job they may share with the police’s investigation units, which also use the same link analysis applications, De Leon said.

The OCD already deploys barangay health response teams to do the legwork in gathering information from their communities. What’s needed is a system to sort through all the data they gather, and the ones used by the military and police intel units would come in handy.

“The barangay team comes back with tons of data. What to do with the data? How do we input this? That’s where we step in,” De Leon said.

This “backend” work would enable the identification of other people’s vulnerability to infection based on their degree of contact with confirmed patients, he added.

All this, including the military’s work in accepting, sorting out, and delivering donations, is well-rehearsed because it’s the same standard procedure during natural disasters, when the OCD with the military’s help, coordinates the national government’s response operations with local governments.

“That mechanism of disaster response has already been established from the national to barangay levels in terms of providing a secretariat and facilities, and the systemic mechanism,” he added.

The OCD now applies this template to the coronavirus pandemic, including the crucial task of contact tracing. Close contacts must be quarantined, even if just in their homes or neighborhoods, if the goal is to “flatten the curve” or curb the rate of the virus transmission.

“The directive given to the local surveillance teams, associate health workers, even private practitioners…is to monitor close contacts and persons under quarantine,” and the military’s capabilities in link analysis can help them fulfill this task, De Leon said.

https://www.rappler.com/nation/257919-military-ready-to-help-trace-coronavirus-close-contacts-afp-civil-relations-chief
Posted by Retired Analyst at 8:46 AM