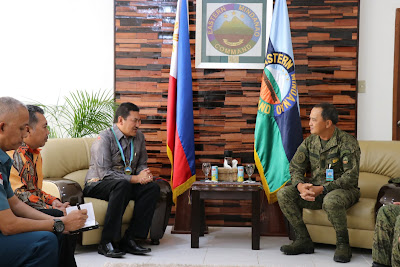 They further talked on the ways and possibilities of enhancing the regular conduct of coordinated patrols between the two countries in the border as stated in the 1975 RP-RI Border Agreement.

It can be recalled that the two Countries increased the frequency of the conduct of coordinated patrol for this year from two legs to four legs wherein the 10-day first leg was conducted from May 1-10, 2019, while the second leg is expected to kick off on the second week of July 2019.

Likewise, during the call, Consul General Fabrian extends and opens his invitation to soldiers who are interested to learn Bahasa language and to the Indo Trade, Tourism and Food Expo in Davao City on July 12-14, 2019, Lt. Gen Santos in return expressed his support to the different activities of the Consulate in Eastern Mindanao.

"Rest assure of the support of Eastern Mindanao Command not only in securing our common border but also in all socio-economic activities of your consulate and Indonesian Government benefitting the Indo Nationals in Eastern Mindanao and those that will strengthen the bilateral relation of our countries." Lt. Gen Santos said.