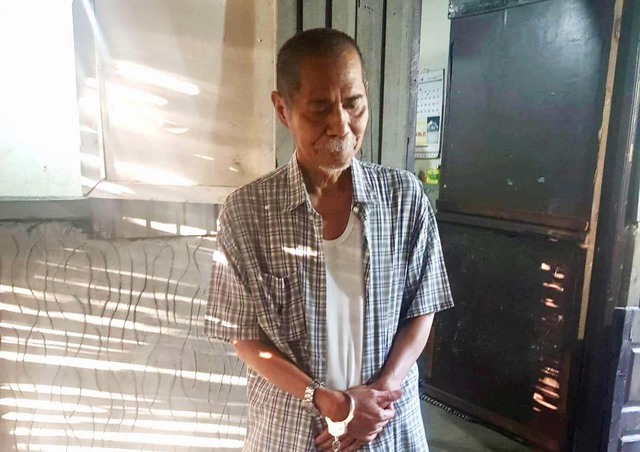 National Democratic Front consultant Frank Fernandez, a top New People’s Army leader in Negros Occidental, has been arrested in Laguna province on March 24, 2019. He was taken to an Army hospital after complaining of chest pains. In 2016 the military set a P7.8-million bounty for his arrest. PNP PHOTO

BACOLOD City – The apprehension of Ka Francisco “Frank” Fernandez – the National Democratic Front (NDF) spokesman in Negros Island – is a “historic event,” according to a Philippine Army official.

“Personally, I am very happy. I’ve been running after Frank Fernandez since I was a lieutenant. I’ve waited this long,” said Brigadier General Benedict Arevalo, commander of the 303rd Infantry Brigade based in Murcia, Negros Occidental, in a press briefing on Wednesday.

Government forces had been chasing the 71-year-old Fernandez for about three decades, said Arevalo, who was assigned as an Army intelligence and operations officer in Negros Island in the 1990s.

Arevalo said his men had tried to catch the elusive Fernandez several times but failed.

Fernandez was caught on March 24 in Liliw, Laguna on the strength of an arrest warrant the court issued in relation to murder charges he faces.

His 66-year-old partner Cleofe Lagtapon – who also have ties to the rebel movement – was arrested with him.

“This is historic, not only for Negros, also but for the Communist Party of the Philippines-New People’s Army (CPP-NPA). I believe Frank Fernandez is one of the last living true icons of the CPP-NPA-NDF. He is the ‘biggest fish’ caught in Negros Island,” Arevalo said.

https://www.panaynews.net/ka-franks-arrest-a-historic-event-phil-army-official/
Posted by Retired Analyst at 11:41 AM