No bilateral ceasefire yet; NDF, GRP can’t agree on revolutionary tax, other issues

From the often pro-Communist Party of the Philippines online publication the Davao Today (Nov 25): No bilateral ceasefire yet; NDF, GRP can’t agree on revolutionary tax, other issues 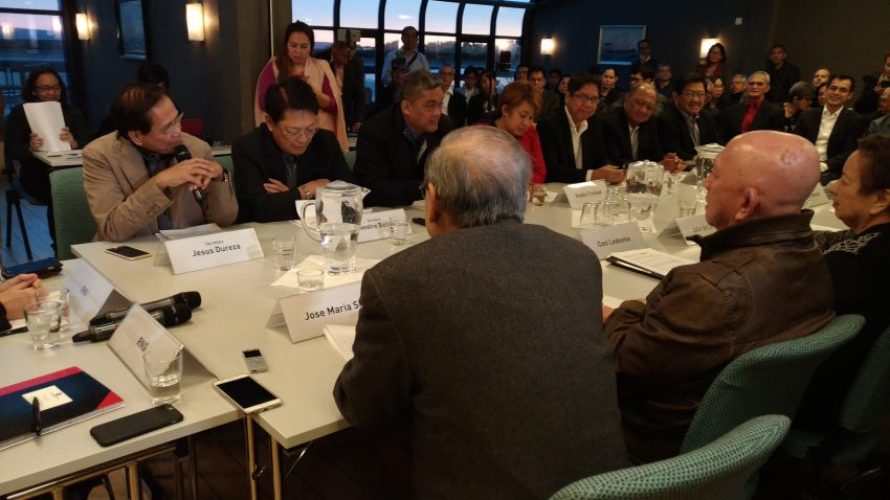 The second round of talks between the government of the Philippines and the National Democratic Front of the Philippines opened Thursday, October 6 at the Holmenfjord Hotell in Oslo, Norway. (Zea Io Ming C. Capistrano/davaotoday.com file photo)
The government and the National Democratic Front of the Philippines have yet to achieve consensus on various points before signing a bilateral ceasefire agreement.
In a press conference in Malacañang on Tuesday, GRP negotiator for the NDF and Labor Secretary Silvestre Bello III said among the issues that the two panels have not agreed upon are the definition of a hostile act, buffer zones, and who constitutes the monitoring team that for the implementation and compliance with the ceasefire.

“What is considered as a hostile act? When you look at it, it seems easy, it’s easy to talk about but it gets difficult. There are many ramifications like is the collection of revolutionary tax considered a hostile act?” Bello said.

Bello said because of these remaining issues, the signing of a joint bilateral ceasefire by December 10 seems impossible.

In the August 26 Joint Statement of the GRP and NDF, the ceasefire committees of both Parties were tasked to “reconcile and develop their separate unilateral ceasefire orders into a single unified bilateral agreement within 60 days” from August 26.

Meanwhile, Bello said he met with NDF chief negotiator Fidel Agcaoili last week where he said he was able to bring up the issue of the signing of the bilateral ceasefire.

“We had occasion to meet and explain to him about the difficulty of getting a final signing of the bilateral because of the definition of terms. But we had a gentlemen’s agreement that we may make some announcements regarding the unilateral ceasefire,” he said.

Bello said he is aware that the CPP’s declaration of ceasefire is indefinite.

“But for the sake of our public, maybe it is best that we have an announcement that we are extending the ceasefire so that our countrymen will have peace of mind, so that is very possible,” Bello said.

No need for extension

In a statement on Oct. 30, Agcaoili said Bello sent a letter to him on Oct. 20 proposing both Parties to “simultaneously declare their renewed commitment to their respective unilateral indefinite ceasefire” in view of the fact that the two sides could not meet on the October 26th, the deadline to work out a bilateral ceasefire agreement.

But Agcaoili said there was no need for the NDFP to make such a simultaneous declaration with the GRP. He said the Communist Party of the Philippines and the New People’s Army’s declaration of interim ceasefire, which took effect on August 28, will remain valid during the course of the peace negotiations “until superseded by a ceasefire agreement to be issued jointly by the NDFP with the GRP within the next 60 days or until a notice of termination of this ceasefire declaration takes effect 10 days after receipt of said notice by the GRP Negotiating Panel from the NDFP Negotiating Panel.”

Meanwhile, the NPA said the Army continues to launch “military operations”, particularly in Caraga region despite the ceasefire declaration of President Rodrigo Duterte a week ahead of the Communist’s interim ceasefire.

“The AFP continue to conduct counterinsurgency operations in the barrios of Caraga in perpetuation of its brutal campaign Oplan Bayanihan. The AFP troops continue to encamp, go in and out of barrios under the guise of implementing “peace and development outreach programs”, supposedly providing security for the Pamana projects and implementing the government’s anti-illegal drugs campaign,” said Ariel Montero, regional spokesperson of the NPA in north eastern Mindanao.

Montero described the AFP’s activities as “provocative”, “combat actions” which he said could sabotage the ongoing peace talks.

Montero said the government troops conduct peace and development programs and civil military operations in “not less that 70 barrios” in northeastern Mindanao.

He said the army is also putting up CAFGU detachments in barrios in the towns of San Miguel, Carmen, Cantilan and Cagwait in Surigao del Sur.

“They conduct intelligence operations against the people in the barrios especially those they believe to be sympathizers of the revolutionary movement and relatives of NPA members,” he said.

Montero added that the soldiers are using the anti-drug campaign Operation Tokhang against known members of progressive mass organizations “to compel them to quit.”

NDF panel member Benito Tiamzon said similar activities of the AFP occur in other parts of the country, particularly in Panay, Eastern Visayas and Sorsogon.

“Instead of asking about drugs, however, the military has been interrogating residents about the New People’s Army,” he said.

Montero said there were many instances when the NPA had the opportunity to attack the government troops.

“But the NPA strongly adheres to the guidelines prescribed by the CPP and National Operations Command of the NPA on the ceasefire,” he said.

During the celebration of 10th year anniversary of the Eastern Mindanao Command here on August 26, Army commander Lt. Gen Rey Leonardo B. Guerrero said that the declaration of ceasefire will help them in the implementation of Peace and Development Outreach Program in far flung communities.

“Now that a ceasefire with the CPP-NPA is in effect, we expect that the implementation of the government’s peace and development programs in the countryside will be able to proceed much faster providing the much needed services to even the remotest barangay,” he said during the ceremony.

PDOP program promotes partnerships of efforts between the Philippine Army and the Provincial Government and its Local Government Unit’s (LGUs).

Guerrero said the soldiers’ immersion in the communities helps in clearing areas of NPA presence. He said for the past 10 years, a total of 150 barangays was cleared of NPA allowing the declaration of five provinces and one city as “conflict manageable and development-ready areas.”

After a decade, Guerrero said that in the area covered by EMC, NPA members reduced by 115, while number of NPA firearms reduced by 177.

“This reduction of NPA is from the effective barangay immersions supported by the members of the community,” he said.

Meanwhile, the NPA challenged Duterte to order the pull-out of military troops from civilian communities.

“We challenge the Duterte government to ensure that the AFP abide by the declared ceasefire of the GRP and pull out military troops from civilian communities. As such, the peace talks will advance and steps to resolve the root causes of civil war in the Philippines will continue.

In a press conference on July 29, Duterte said that the pull out of the military from the mountains “is out of the question.”

He said he has already told Agcaoili about it during the start of the talks.

“It is not an issue at all,” Duterte said at the headquarters of the 60th Infantry Battalion, in Barangay Doña Andrea, after he visited the wake of Panggong Komanod, a Cafgu Active Auxiliary killed by the NPA’s on July 27.