Previously, Duterte said he refuses to talk peace with the Abu Sayyaf as it would be 'like slapping the nation' 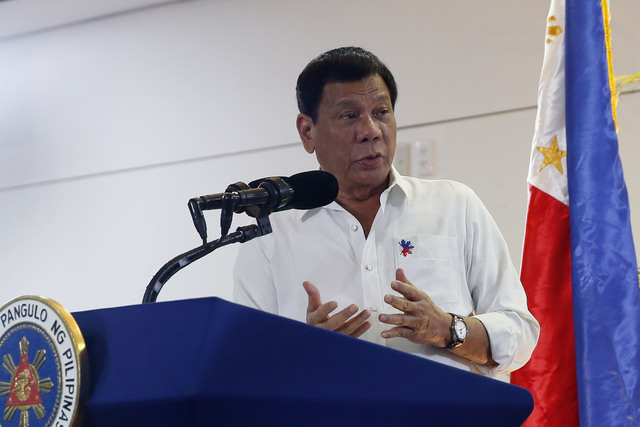 
“Pati (Also) Abu Sayyaf, I’m ready to talk to them. I’m ready to open the borders,” he said during a visit to a military hospital on Friday, November 25, in Zamboanga City.
“I’m ready to talk about opening the borders down south, no problem,” he added.
The President seemed to connect the opening of borders with the time when free trade flourished, also a time when there was not much violence and conflict.
“Kasi may trade pa noon, wala masyadong gulo noon (There was trade there before, not much violence),” he said.
Free trading of goods used to flourish along the southern border leading to Malaysia and Indonesia. Zamboanga, for instance, used to be a free port where goods from places like Sabah would come in.
Previously, Duterte said he refuses to talk peace with the Abu Sayyaf as it would be “like slapping the nation.”
The idea of including the bandit group in Mindanao peace talks was suggested to Duterte by Moro National Liberation Front chairman Nur Misuari.
Duterte has slammed the Abu Sayyaf for mutilating and killing in the name of Allah and called their beliefs “despicable."
The terrorist group continues to hold Indonesians, Malaysians, and Filipinos hostage in their stronghold in Sulu. Duterte admitted that other heads of state, including Indonesian President Joko Widodo, have brought up the need for “drastic” action against the Abu Sayyaf.
“They are calling for a drastic action. The suggestion is, they’ll just blow you up. If you are in their waters and you are Filipinos, wala akong magawa (I can’t do anything). That is piracy. That is crime against humanity in any country,” he said.
He was referring to his suggestion to Indonesia and Malaysia that they “blow up” Abu Sayyaf kidnappers or other pirates who enter their waters and try to escape through Philippine waters.
Civilian lives
Asked what other measures he would implement to eradicate the Abu Sayyaf Group, Duterte said if he wanted to be a “bad boy”, he would conduct a “full blast invasion” in Sulu.
“I can call on the Armed Forces of the Philippines to go all-out war, invade mo na lang ang Sulu (just invade Sulu). But I cannot do that because there will be huge losses of civilians which is really what matters most,” he said.
Duterte said peace talks with communists has “freed up” more government troops for the campaign against the Abu Sayyaf.
“I can do more if I want to, if it’s just a matter of stopping it…Lalo na kasi bakante na ang sundalo sa Luzon, pati Visayas (Especially since soldiers in Luzon and Visayas are free) because we’re having talks with the communists in Olso,” he said.
Fighting between government troops and the Abu Sayyaf continues to inflict casualties on both sides. Several times, Duterte has visited wounded soldiers to express his support and loyalty to them.
http://www.rappler.com/nation/153619-duterte-ready-talk-abu-sayyaf
Posted by Retired Analyst at 9:48 AM