International solidarity mission to the Philippines 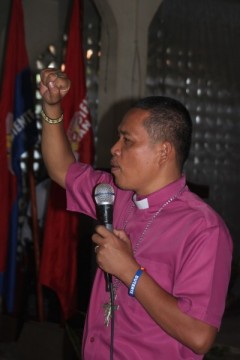 Guinoman, Zamboanga Sibugay, Philippines - On July 16, three vans stuffed with passengers traveled the badly eroded, muddy, narrow road from Pagadian City to the village of Guinoman in Western Mindanao, in the province of Zamboanga Sibugay. On the roof of one of them was a dog, standing on all fours, that managed to stay on its feet through one of the torrential downpours that are a daily occur-rence in July.

The vans included 14 members of the International Solidarity Mission, including activists from Canada, the U.S., Australia and Kenya. About half were Filipino, and all were there to support the Filipino people fighting for their rights.

These include trade union rights for workers, the right to land for the peasants or farmers, or the right to self-determination and control of ancestral land for the indigenous Lumad people. All these rights have come under fire as a result of new international agreements, such as the Trans Pacific Partnership pushed by the U.S. This latest so-called ‘free trade’ law will eliminate limitations on the profits of multinational companies in mining and agriculture.

Imperialist militarization in the Pacific

The U.S. ‘pivot to Asia’ announced in 2012 is in part a military response to the rise of the People’s Republic of China as an economic power. It’s also designed to help enforce U.S. corporate interests in the Philippines and elsewhere in the Pacific. Imperialism as a factor in national economic and political affairs is constantly present in the Philippines.

For example, as delegates were arriving in Manila, there was the latest news from Japan that Prime Minister Shinzo Abe wants to revise the clause in the constitution that renounces war. Abe’s revival of militarism is part of Japan’s role as junior partner to the U.S. in Asia, aiding in the U.S. objectives to contain China, as well as destroy socialist Korea. It also reminds the region of Japan’s role in the Second World War, when the occupation of the Philippines resulted in over 1 million deaths.

The backdrop of foreign militarism helps set the stage for the presence of the Armed Forces of the Philippines (AFP) in Mindanao, the epicenter of militarism in the country. 60% of the AFP is concentrated there because of the so-called War on Terror. Nene, a Filipina activist who had worked in this part of the country, pointed out that the Pentagon claimed the AFP recently attacked the group, Abu Sayyaf. In their statement, the military claimed that the shadowy group had about 200 fighters in Mindanao. “They have been claiming Abu Sayyaf has 200 for 15 years. It’s just the pretext for intervention.”

Militarism - at home in the Philippines

In Guinamon, the delegates heard testimony from witnesses of the very real use of force by company goons, the Armed Forces of the Philippines, and paramilitaries against the local people. One man, a small scale miner named Benedicto, reported being fired upon by the AFP in October 2013. “Under the command of Col. Idan of the 44th Infantry Brigade, four trucks of AFP and Philippine National Police came and conducted demolition,” of the mining site he was working on Balabag Mountain. Troops then opened fire, strafing their camp. The miners retreated to safety.

A woman named Fe told the story of her husband, Rene, a laborer employed by the small scale miners. Her husband’s job was hauling bags containing cans of gas, carbon and other materials up to the sites on Mount Balabag. “The Blue Guards wouldn’t allow him to deliver to the location.” Blue Guards are a security firm hired by the large scale mining company, Toronto Ventures, Inc., which had been awarded a contract to explore for gold and silver on Mount Balabag. Their contract expired in 2012.

In 2013, her husband was working for Silva, a company that contracted with the miners, proving equip-ment for the extraction of gold from the ore. “He was working at night because the company wouldn’t let the small miners return even after their contract expired. The Blue Guards fired on him and our sons. My husband fell off a cliff, breaking something in his back. He is now disabled.”

These attacks bear the marks of the counter insurgency approach taken by the government of the Philippines under the direction of the U.S. military Counter Insurgency guide. The new president, Rodrigo Duterte, seems to be taking a different approach, reopening peace talks with the National Democratic Front of the Philippines, and releasing political prisoners allegedly linked to the communist led New People’s Army (NPA). Agreeing with the president’s approach, Amirah Ali Lidasan, the coordinator of the ISM in Western Mindanao, remarked, “NPA presence in areas where there are people’s resistance can’t be denied. Hence, discussion of peace talks is a must.”

The activists from around the world that came here were invited by the International Committee for Human Rights in the Philippines (ICHRP). Many of the over 200 delegates went to Mindanao, where the AFP’s anti-insurgency campaign Oplan Bayanihan targets especially the Lumad or indigenous peoples of Mindanao. Many of the miners, farmers and laborers, including Benedicto, Fe and her husband, displaced from the village of Bayog at Balabag Mountain are members of the Subanen tribe.

Bishop Antonio Ablon of the Philippine Independent Church in Pagadian, Zamboanga Sibugay, said, “This ISM is bigger, and the agenda is more comprehensive than before.” The growth of the international solidarity effort seems to mirror the advances in the people’s struggle across the Philippines. Lidasan noted, “Over 200 people are traveling from Western Mindanao to rally at the State of the Nation Address by President Dutarte. They are joining 5000 from across Mindanao.” She clarified, “We are going not to celebrate, but to support the platform that the president ran on, to ask for justice.” Justice including an end to the human rights abuses, an end to impunity for the extra-judicial killings, and for an end to the land grab from the Lumad.

http://www.fightbacknews.org/2016/7/22/3-days-rural-mindanao-human-rights-abuse-and-land-grabs
Posted by Retired Analyst at 8:19 AM