From The Guardian (May 9): Nascent peace deal at risk amid Philippines' political uncertainty

An accord with moderates to end a Muslim insurgency that has claimed 150,000 lives may not survive in looming power vacuum 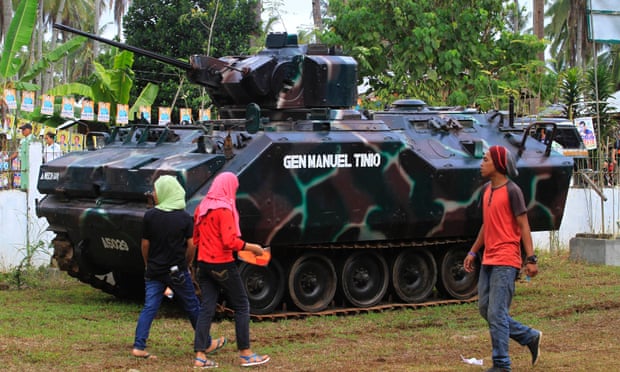 Residents walk past a tank outside a polling station in the town of Pantar, in Mindanao, on 9 May as people vote in the Philippines’ presidential election. Photograph: Richel Umel/AFP/Getty Images

Political uncertainty in the Philippines – which is likely to continue through the summer months whoever wins Monday’s controversial national elections – risks wrecking efforts to end one of the world’s longest-running Muslim insurgencies that has claimed 150,000 lives, regional analysts warn.

Even then, it is unclear whether the next president or a majority in congress will support it. If Rodrigo Duterte, the maverick law-and-order candidate who led in pre-election polls, wins, nobody truly knows what may happen. Nor do the other presidential candidates share Aquino’s passionate commitment to the peace process, modelled in part on Northern Ireland’s Good Friday accords.

The looming power vacuum in Manila has led security analysts to predict that the MILF’s moderate leaders, who forswore their bid for independence in 2003 and have opted for negotiations over continued armed struggle, could be supplanted by a younger generation of Mindanao militants impatient for change.

“There’s one village where I’d say 95% of the men are BIFF,” Jimmy Amolay, a captain in the Philippine army, told Irin news agency. “In the daytime they’re in plainclothes, but at night they turn into BIFF.”

The group’s aims resemble those of their predecessors: freedom from military and official abuses, self-determination and an end to endemic poverty in mineral and resource-rich Mindanao. The difference is that they espouse armed force to achieve their objectives.

There are also concerns that international terrorist groups such as Isis could move in to exploit the vacuum. The BIFF has already pledged allegiance to Isis. “We consider them brothers, but we are not part of them,” said Abu Misry Mama, a BIFF spokesman.

Another worry, analysts say, is that a resumed insurgency will distract the Philippines’ armed forces from growing external threats posed by Chinese military expansionism in the South China Sea (known in Manila as the West Philippine Sea) and maritime piracy across south-east Asia. Indonesia called a regional summit and imposed a temporary ban on unescorted shipping to the Philippines last month after a spate of kidnappings of seamen by Abu Sayyaf.

Teresita Quintos Deles, a senior presidential adviser, argues that sustaining the Bangsamoro peace process is a matter of crucial symbolic importance for the Philippines and for the international community as a whole.

“Success can help us arrest the spread of extremism around the globe by showing clearly that an Islamic movement can address its grievances and pursue its interests through a legitimate mode of democratic political engagement while still remaining within the country’s territorial and constitutional framework, and without losing their culture and identity,” she said.

http://www.theguardian.com/world/2016/may/09/nascent-peace-deal-at-risk-amid-philippines-political-uncertainty
Posted by Retired Analyst at 11:21 AM