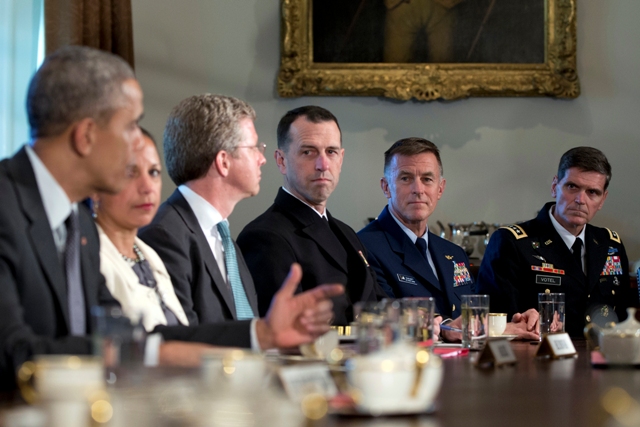 A look at some recent key developments in the South China Sea, where China is pitted against smaller neighbors in territorial disputes over islands, coral reefs and lagoons in waters rich in fish and potential gas and oil reserves:
___
Editor's note: This is a weekly look at the latest key developments in the South China Sea, home to several territorial conflicts that have raised tensions in the region.
___


Singing to the troops

China's navy has launched annual war drills in the South China Sea with one of its most advanced warships, the missile destroyer Hefei.

The exercises include simulations for breaking an enemy blockade and reconnaissance drills with submarine forces. Five other guided-missile destroyers, a frigate and a supply ship of the South Sea Fleet based in Sanya on Hainan Island, home to a major naval and air force base, are taking part.
According to the official Xinhua News Agency, the ships will be joined by forces based in the Spratly and Paracel islands, where China has embarked on massive island-building to expand and reinforce the reefs it controls in the disputed region.

Also last week, China sent famed singer of patriotic anthems Song Zuying on a tour of its man-made islands in the Spratlys to entertain troops and underscore confidence in asserting its claim in the contested area.

Among the songs performed: "Ode to the South Sea Defenders," whose lyrics speak of "troops of stout men with guns in their hands who battle the wind and fight the waves to guard the nation's door."

Photos of the performances also offered a rare glimpse of the extensive work China has been carrying out at Fiery Cross Reef, showing lighthouses, harbors and buildings. In the background of some can be seen one of the navy's massive Type 071 amphibious dock ships, capable of carrying four helicopters and as many as 800 troops.
___

Beijing has also sent the Lanzhou missile-guided destroyer that took part in Beijing's South China Sea drills for a multinational exercise that started last week off the waters of Brunei and Singapore. It joined the navies of the 10 countries of the Association of Southeast Asian Nations, along with those of the U.S., India and six other dialogue partners for a maritime security and counterterrorism exercise.

Several ASEAN members, including Vietnam and the Philippines, have claims in the South China Sea.

The drills include a land-storming exercise. The U.S. is participating with a P-8 Poseidon surveillance aircraft, the destroyer USS Stethem and Army units.

"Our crew will be able to see firsthand how other navies operate and we can learn from them while sharing our own operational tactics and procedures," said Cmdr. Harry Marsh, commanding officer of the Stethem.
___

The commander of the U.S. Navy's 7th Fleet says the cancellation of a planned port visit to Hong Kong by an American aircraft carrier is just a "minor hurdle" in relations between the two militaries.

Vice Adm. Joseph Aucoin spoke Friday in China's financial hub of Shanghai after the docking of the USS Blue Ridge, the fleet's command ship, whose visit he said indicated the durability of the China-U.S. military-to-military relationship.

The U.S. State Department said last month that China recently denied a request for the USS John C. Stennis to visit Hong Kong, in an apparent sign of mounting tension in the disputed South China Sea. China hasn't explained the reason for the cancellation, but previous cancellations have been linked to tensions over Taiwan or other political and military disputes.

Aucoin said he didn't know why the visit was denied, although Defense Secretary Ash Carter and his Philippine counterpart had visited the carrier in the South China Sea two weeks earlier, irking Beijing. The reason "would probably be a good question for the government of China," he said.

The U.S. Coast Guard commandant said the Chinese coast guard is on the front line provoking the U.S. Navy.

"We are seeing Chinese fishing trawlers provoking the United States Navy, carrying out sovereign acts, but just over the horizon is the PLA," said Adm. Paul Zukunft, referring to the People's Liberation Army.

"So our biggest concern is about a miscalculation. But their coast guard has not been transparent in terms of what their intent is," he said at a discussion at the Council on Foreign Relations.

He said the U.S. was working with its Chinese counterparts on a code of conduct for armed planned encounters at sea "so they won't take these actions against our Navy and other forces as well."

"Our sense is that China does not want to be a global hegemon, but they clearly want to be recognized as the regional leader in this area," he said.

Adm. John Richardson, chief of naval operations, said at the same forum that the Navy's freedom of navigation operations — sailing warships close to Chinese man-made islands — are working. Their aim is to advocate for an international set of rules that ensures the free flow of goods and services in one of the world's busiest shipping lanes, he said.

"They don't extend beyond that. There's just a pure advocacy for that system. So we design those very carefully. It's a policy decision that is made, interwoven with those other elements of power. So I think both aircraft, ships are ready to execute those as they fit into the plan," he said.

China has criticized Washington, saying it is trying to provoke conflict with such maneuvers. But Beijing also says it won't impede free navigation.
___

"The case brought by the Philippines is nothing but a political farce under the cloak of law. ... It is a grave threat to regional peace and stability." — Ouyang Yujing, the head of the Chinese Foreign Ministry's Department of Boundary and Ocean Affairs, referring to the case filed at the U.N. Court of Arbitration.